The Youngstown State University men’s basketball team is preparing to start its 2017-2018 season under a new coaching staff.

Jerrod Calhoun was named head coach in late March after spending the past five seasons as head coach at Fairmont State University in West Virginia. Calhoun is a Cleveland native who spent two years playing at Cleveland State University, which, like YSU, is part of the Horizon League. He’s a 2004 graduate of the University of Cincinnati, where he began his coaching career.

In the following three years at Walsh University in North Canton, Calhoun helped lead the Cavaliers to a national championship in 2005 as an assistant coach. Their overall record between 2005 and 2008 was 82-21. He then moved on to West Virginia University, where he spent five seasons as assistant coach. The Mountaineers made five tournament appearances, making it to the Final Four in 2010 and the Sweet 16 in 2008.

Calhoun was named 2017 Mountain East Conference Coach of the Year after leading the Fairmont State Fighting Falcons program to their first ever national runner-up finish and more than 30 wins on the season. He’s now preparing to start his first season as the Penguins’ head coach.

“I think Youngstown State is a program we can turn into a winner,” Calhoun said. “The fanbase at YSU is very passionate about basketball.” 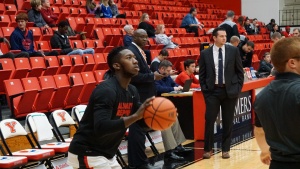 Official practices for the team began at the end of September, and the countdown to the beginning of the season is on with just a few weeks to go.

“It’s a very big month for us. We have 11 players on our roster who have never played a Division I basketball game before. We have a brand new team, brand new coaches, brand new style, so I think getting comfortable and getting to know one another is important,” Calhoun said.

Getting comfortable required time, and Assistant Coach Jason Slay said time was key during the off-season.

The team has goals for the next two weeks of practice to help them perform at their best.

“We have about 10 fundamentals we still have to cover, so the next few weeks are critical for that, and also just staying together, staying healthy and working hard,” Slay said.

The new year has been an adjustment not only for the coaches, but the players as well. Jeremiah Ferguson, a sophomore point guard, is in his second season at YSU and had to adjust to the new playing style and staff.

“It came as a shock at first, but once we got used to the coaches and what they wanted, things came easy,” Ferguson said. “I think our team this year is a lot better and a lot closer.”

The YSU men’s basketball team will face Thiel College at home on Oct. 24, then Kent State University in Akron on Nov. 11.