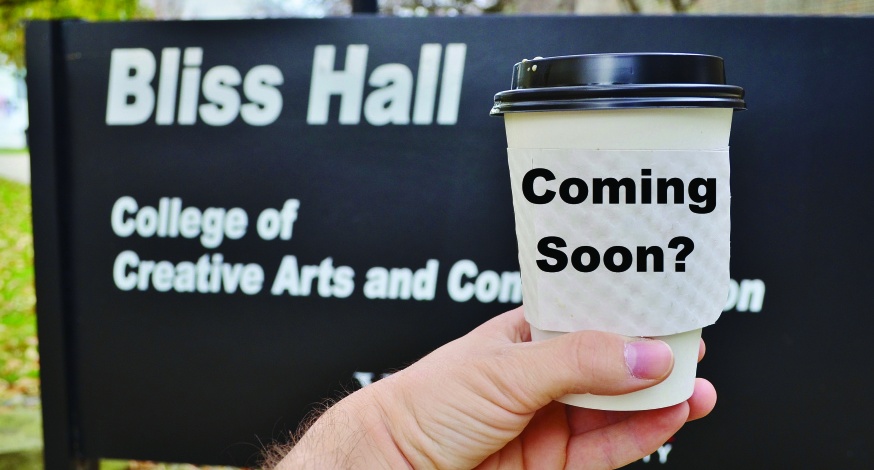 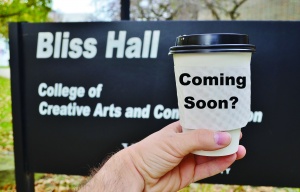 Bliss Hall is home to two art galleries, four departments, about 850 students and only a handful of vending machines full of candy and chips.

Although Crist is not certain that Chartwells will agree to build and operate the cafe, he’s hoping to have one in Bliss Hall by the beginning of the 2016 spring semester.

Crist said a cafe would be beneficial because students at Bliss Hall are somewhat isolated from the rest of campus, which makes it difficult for them to get food in-between classes and at night when they are working on performances and projects. Right now, the initiative is in the planning stages.

“If you want students to do well in class, if you want them to be prepared for a performance, they need to be in good condition, they need to sleep and they need to eat,” Crist said. “We’re creating bad habits for them right from the very beginning. My goal is … offering them healthy food options … Let’s have some fruit, let’s have some veggie wraps, maybe even, God forbid, some hummus or something. So there’s an opportunity to eat food that’s nourishing and … available, all at the same time.”

Howard and Chartwells are working together to determine possible locations for the cafe and, if a new location is installed, how much revenue it would generate. Since it’s early in the planning stages, there is no definite answer as far as what the budget is for the project and exactly how it would be funded.

The Student Government Association is contributing to the cause by sending a survey to YSU students that asks questions concerning the proposed cafe. Madeline Grimes, marketing manager intern for SGA, said there was a positive response among students; they received almost 350 responses in just a few days.

“I really think it would be something that’s not only convenient for the Bliss Hall students, but to cater to those who come to concerts held at the university [and] at the recital hall,” Grimes said.

Crist said that it would be ideal to have someone serving food near the theater on the first floor instead of just having vending machines for students and visitors alike.

Howard said that a cafe also has potential customers living in the Courtyards, especially since many of them walk through Bliss Hall on their way to class when the weather gets cold.

“[The building is] right next to the University Courtyards with 400 students there who are always looking for something to eat. Yeah, everyone has an apartment with a kitchen, but everybody doesn’t cook every day,” Howard said. “So, if we could have something that could appeal to that crowd in addition to the folks at Bliss, it could be a workable option.”

If the cafe is built, Howard said it will be similar to the Cushwa Cafe and the Schwebel Cafe located in the Williamson School of Business, both operated by Chartwells. He said that having good food within close proximity to the Bliss classrooms is important because time is critical to a student.