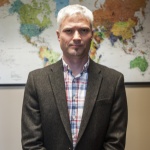 Nathan Myers was appointed as the new associate provost of international and global initiatives by the Youngstown State University Board of Trustees during their March meeting.

“We are moving forward on a number of initiatives that he is getting his arms around,” Abraham said. “We’re excited about the types of things he will bring, the connections he has and the opportunities that he will offer for our YSU students.”

Myers said he wants to increase enrollment of international students at YSU and make it easier for domestic students to study abroad.

“We have great programs at a nice price,” Myers said. “I want to pull together a team to market these programs more effectively.”

“His initiatives will be great for our students and our entire campus community,” Tressel said. “It would be great for our domestic students to live in a world that’s more like the big world they’ll face when they [graduate].”

Right now, only 400 of more than 12,000 YSU students are international. Myers said he would like to triple that number.

“I think it’s reasonable to have 10 percent of the student body be international,” he said. “We have some work to do.”

Right now, around 140 students study abroad each year. Myers said the problem is that the opportunities are not universal.

“Some students in some colleges … don’t have that path to study abroad,” Myers said. “We’re not offering a program specifically for every student at YSU, and that’s a goal.”

Myers said he is concerned that the university only has nine students from China, so one focus will be building on the trip YSU officials took last fall and recruiting more Chinese students.

“[The trip] was very important because we sent key decision makers who were able to make contacts to basically establish the seeds of joint programs,” Myers said.

Myers said he sees advertising YSU’s programs to international students as a major component of his plan to increase international enrollment. Establishing connections overseas would help accomplish that goal. He said Kent State University has two employees working in China to represent their school. YSU doesn’t have any.

Myers said he intends to recruit in Bangladesh later this year. He compared it to fishing in a small pond because it’s a market many universities ignore.

“We’re also looking at some other areas, maybe in the spring we’re looking at Iran,” Myers said. “I think with a university like YSU we have to work harder than other people, but we also have to work smarter … there’s still space in some of the emerging markets.”

Myers served as the executive director of international programs at Ashland University prior to his arrival at YSU. During that time, he helped Ashland establish a program to bring in 85 international students every summer, played a role in the university — obtaining CEA accreditation for their English language institute — and created an ambassadors program.

The program incentivized high school students to help international students for two hours a week by offering to deposit $500 into an account each semester that can be used to study abroad.

“If you’re an ambassador for your freshman and sophomore year, you have $2,000,” Myers said. “You can use that money anyway you want as long as you … study abroad. People loved it.”

He said the ambassadors helped solve critical problems for students who were in the country for the first time, helping them to grow accustomed to life in the U.S. It also helped them prepare for studying abroad.

Myers said YSU needs to improve fundraising strategies so they can provide monetary support to students who travel overseas. There is currently a small scholarship, but Myers said it’s not enough.

“They need someone to aggressively create new programs and aggressively find ways to support students financially to enable more students to do it,” he said.