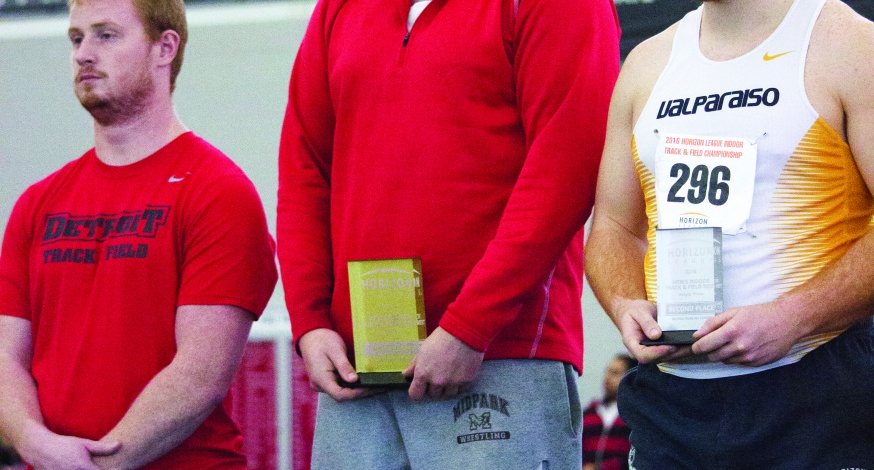 For the first time in Youngstown State University’s history, the school’s track and field team was represented by two athletes at the NCAA Indoor Track and Field Championships — thrower Conner Neu and runner Chad Zallow.

Senior Conner Neu joined a short list of track and field athletes to be named as an All-American. Neu finished eighth in the NCAA Indoor Track and Field Championships last weekend en route to being named a first team All-American.

Neu came into the championship seeded 10th in the weight throw competition but threw a distance of 21.47 meters to earn the eighth spot and the final All-American spot.

In his senior season, Neu reset the YSU record book twice in the weight throw and won the Horizon League title in the event.

Freshman runner Chad Zallow also had an impressive showing at the 60-meter hurdles finishing ninth and earning Second-Team All-American honors, just missing being named First-Team All-American. Zallow missed qualifying for the finals by .006 seconds, finishing with a time of 7.767 seconds.

“It’s definitely a little disappointing. I wanted go in there and get first team All-American, but I can’t complain. Just being there is a huge honor,” Zallow said. “Over the next four years it’s definitely one of my goals to bring a National Championship to Youngstown, and that’s the plan. I’m working for that, and wont stop until I get it.”

Zallow had one of the most successful freshman seasons in the country after being named Horizon League Indoor Track Athlete of the Year and broke the YSU school record in the 60-meter hurdles five times.

“It’s great to start off on such a great note,” Zallow said. “I hope to continue that on to outdoor season. It’s been an exciting year so far and I just want to keep it up.”

While Zallow hopes to continue his individual success, he said his main goal going into the outdoor season is to bring the men’s team another Horizon League Championship.

“The biggest goal for me is helping our team win another Horizon League championship,” Zallow said. “My goal after that is making it out to nationals and regionals and being named a First Team All-American.”