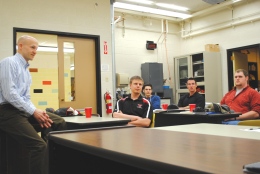 Members of the Youngstown State University National Electrical Contractors Association listen to the advice of YSU alumnus Chris Jaskiewicz regarding their entry for the Green Initiative Contest. Photo by Marissa McIntyre/The Jambar.

Junior Mark Meffan’s proposal, which suggested that campus buildings should be properly ventilated and equipped with LED and energy efficient lighting, won first place in the Green Initiative Contest on Saturday.

“The purpose is to spur a little bit of thought and to get feedback, and to make sure students are aware that there are things that can be done,” said Dave Wright, YSU NECA president.

Wright said the time and effort Meffan spent on the project contributed to his win.

Meffan suggested that YSU use his idea to improve parking decks and other facilities. He also entered a small audit of the M-2 parking deck on Lincoln Avenue and provided figures to determine how much energy could be saved.

According to Meffan’s research, the university could conserve energy and save more than $17,000 by switching to LED lighting in the parking decks.

He determined this by comparing the costs and longevity of different lighting fixtures.

Danny O’Connell, director of support services, said an idea like Meffan’s would be taken into consideration, especially because the second phase of the M-2 parking deck renovation will involve replacing the lighting.

“We’re working with a consultant to find out what lighting fixtures will give us more bang for our buck,” O’Connell said.

He said lighting is the biggest expense in the second phase, so YSU is looking into lighting that would save money and be more energy efficient.

In his contest entry, Meffan said he aspires to open a green consulting firm, and he’s interested in a greener future.

Valsi’s research found that the installation of Visualized Energy’s software, which records energy use in 15-minute intervals, saved energy and money at other facilities. It delivers an electronic feed of energy usage.

Valsi researched the Youngstown Business Incubator’s installation of this device, and she discovered that the YBI saved its clients money by pinpointing areas where they could be more energy efficient.

Other colleges and universities that have adopted energy monitoring systems have saved upwards of $7,000 a year, according to Valsi’s research.

She began her research as a part of the sustainability and society course she’s enrolled in this semester. When she heard of the contest, she decided to enter.

Promoting energy efficiency is important to Valsi. She said if people saw the effects of wasting energy, they would be more likely to take steps to save energy.

Third-place winner and senior Mike Wittenauer had an idea similar to Valsi’s. He also suggested incorporating an achievement level for the buildings on campus.

Wittenauer proposed a color-coding system to illustrate the green-friendly buildings on campus and buildings that need to improve. In it, the color green would represent maximum energy efficiency, while black would indicate the least energy efficient buildings.

“The purpose of our group is to promote [green] awareness and to also give students the chance to have a better understanding of the industry,” said Jason Nutt, YSU NECA vice president.

While overseeing the Green Initiative Contest, YSU NECA has been involved with a similar contest on a national level.

The Green Energy Challenge takes students from colleges across the country to comprise a theoretical plan of action to make their campuses more energy efficient.

After winning second place in the nation last year, YSU NECA members hope their evaluation of the Youngstown Historical Center of Industry and Labor will bring them a first-place prize.

He said the group’s variety would help in the competition; YSU NECA is made up of electrical, mechanical, and civil and environmental engineering majors.

“We have a lot of students that have experience working with this competition in the past,” Bosela said. “I just let them do their thing. If they have any technical questions, I’m here to answer them.”