At least 100 students walked out of their classrooms at 10 a.m. on Wednesday and gathered around the campus rock by Kilcawley Center at Youngstown State University. The gathering marks one month since the mass shooting at Marjory Stoneman Douglas High School in Parkland, Florida.

Youngstown Early College students and YSU students alike stood together in solidarity for 17 minutes to remember the 17 killed during the Valentine’s Day attack, taking part in the #Enough National School Walkout.

The walkout is a part of an attempt to raise awareness of the impact of gun violence and school safety.

The Women’s March Youth EMPOWER organized walkouts nationwide. According to the event’s website, organizers stated that they wanted this protest to be a call to action for Congress to pass gun control legislation.

To commemorate those who lost their lives, each name was read along with sentiments by the president of the Student Government Association, Rayann Atway, and vice president of SGA Ernie Barkett. Seventeen balloons were released to remember each person.

Barkett urged those who are of voting age to get out to the ballot box and vote to change legislation.

“We want our representatives to make the change we want,” Barkett said. “Vote for those who cannot because they lie murdered in their schools, in the streets and in their houses of worship.”

Atway said it is vital for the community and YSU students to come together and make sure that “a tragedy like what happened in Parkland, Florida never happens again.” 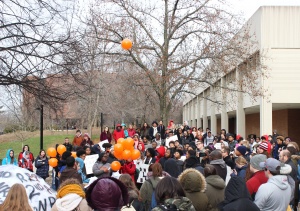 Lekelia Houser, a YEC student, spoke at the protest and challenged those in attendance to take action.

“When you see a wrong, speak up. Do not be a silent witness. We all have the power to make a difference,” she said.

DeMaine Kitchen, president of the Youngstown City Council, spoke at the walkout and said he was proud of the students for taking matters into their own hands.

Kitchen said it could have easily been his children that were victims of a school shooting or his wife, who is a school teacher.

He encouraged and invited the students to attend a Youngstown City Hall meeting to speak on their concerns and to “challenge” the legislators.

Kitchen said that although most high school students are not able to vote, they still have the ability to make a difference.

“You are old enough to have your voice heard and that’s what matters,” he said.

William Blake, director of Student Inclusion and Enrichment at YSU, attended the walkout and said students are making their position on issues relevant to the use of guns in the United States known.

Blake said he was moved by the walkout and that students took charge.

“These are the voices that are going to be the ones to make change … These kids are on the brink of changing the world,” Blake said.