Customers of Stone Fruit Coffee Company seem to be drawn to the music being played within its walls. Located on Lincoln Avenue at Youngstown State University, the employees at Stone Fruit work to keep atmosphere-appropriate music playing for themselves and their guests.

Devin Betsa, manager at Stone Fruit, enjoys the atmosphere and the environment the coffee bar has to offer. Betsa said the music plays a huge part in how the customers feel when entering the shop. 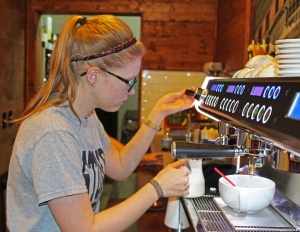 He said a lot of the customers at Stone Fruit have tended to ask him or one of the other employees what song is playing and nine times out of 10, they really enjoy it.

“There’s a lot of people who I’ll hear talking and they’ll say things like, ‘Oh my God, I can’t believe they’re playing this song,’” Betsa said. “It can benefit them if they’re having a bad day and they walk in and their favorite song is playing.”

Betsa said the employees use a station on Pandora that has been very carefully built just from thumbing up and thumbing down songs. Betsa said the music is important to the coffee shop and the music has a lot to do with the whole entire feel and experience of it.

Emma Linnen, a barista at Stone Fruit and an anthropology major at YSU, has worked there the past year. She said the type of music that plays in the shop depends on who is working.

Linnen said it’s a very personalized thing the employees do, with even YouTube playlists being used at times.

“We have classic hits for everybody’s playlist and there’s a Tupac Tuesday playlist,” Linnen said. “We get most creative with this store in the Youngstown location because the crowd is much different.” 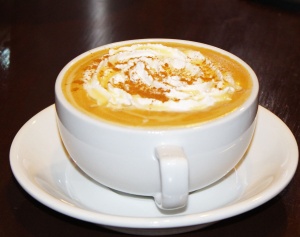 She said she loves the reactions people have to songs that are played in the coffee bar, some being curious and tend to sing along with it. 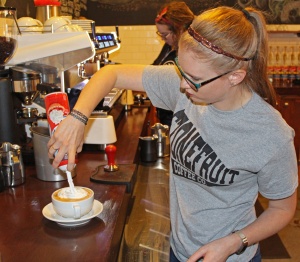 “It’s more than just background music,” Linnen said. “It’s stuff you can get involved with and stuff that you can relate to.”

Christian Powers, a barista at Stone Fruit, has worked at other coffee shops that have set music that isn’t allowed to be changed or customized. Powers enjoys the freedom he and his fellow employees can have when it comes to the music at Stone Fruit.

“We’re allowed to throw ideas out to our bosses and we can have our own playlists,” Powers said. “We have a little bit more of versatility here instead of the Boardman or Columbiana store.”

Powers said a lot of customers like to sit at the bar and jam, especially when throwback songs are being played. Powers said the music plays a huge part in his enjoyment of working at Stone Fruit as well as the enjoyment of the customers they serve.