“Mr. Wheeler’s,” a play about Youngstown, will have its premiere at the Spotlight Theatre in Bliss Hall Friday at 7:30 p.m. The play portrays a group of young adults who work at Mr. Wheeler’s restaurant in Youngstown.

On one life-changing breakfast shift, the group of workers find a bag of money. As skepticism and time grow, the group then finds a second bag of money, and eventually a third and fourth.

Rob Zellers wrote the play. His previous works include “Harry’s Friendly Service,” a play also in the setting of Youngstown, and “The Chief,” the most successful play in Pittsburgh public theater history. 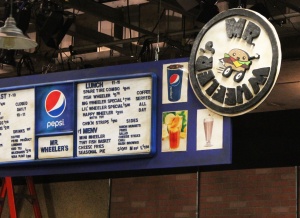 Zellers said the characters aren’t based on anyone in particular, but Mr. Wheeler’s restaurant was once an actual fixture in Youngstown. Prior to becoming a playwright at age 60, Zellers was a high school teacher, which is where some of his ideas for the play came from.

“I taught in what would be a non-affluent school and I noticed that most of my students had jobs,” Zellers said. “I was fascinated by their process of managing work and school, and also upset because they weren’t doing their homework.”

“The story could have easily taken place in some other small industrial city,” Zellers said.

The play speaks on the changes Youngstown has witnessed going from such prosperity to such degradation, and then figuring out how to turn it all around, Zellers said.

The director of “Mr. Wheeler’s,” Matthew Mazuroski, said the play will appeal to a broad audience because many will be able to relate to the struggles these characters go through. He said the cast adds an authenticity to their roles and to the play as a whole.

Daniel Navabi is an understudy for the role of Dougie. The character, Dougie, suffers from a mental disability and is what Navabi describes as the heart of the play that keeps everyone together.

Navabi said the part has its difficulties; the character doesn’t have many lines, but is a constant in the play making it a more physical character to portray. Comparing it to a group-led ” The Breakfast Club,” Navabi said there isn’t a true lead role in the play.

“The play really relies on the chemistry between characters.” Navabi said. 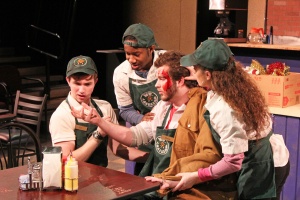 Mazuroski said he feels people will react positively towards the play. He said people will like seeing how scrappy and tenacious these 20 somethings are.

“No matter what happens, they always seem to find a way to solve the problem,” Mazuroski said.

Tickets for the play are $16 for general admission and $8 for YSU faculty and staff. Admission is free for YSU students.

One thought on ““Mr. Wheeler’s” Rolls in for a Youngstown Debut”