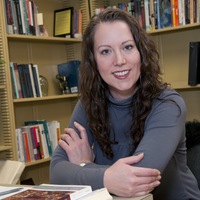 Deborah Mower, professor of philosophy and religious studies at Youngstown State University, has been awarded $155,747 by the National Endowment for the Humanities to co-direct a summer research institute on moral psychology.

She provided examples of the differences between young children and adults — children don’t have a high moral capacity compared to adults — and what goes on between adolescents on the way to adulthood that causes adults to make good moral choices.

The research will also take a look at how morality is affected through education, family dynamics, religion, music, literature, film, art and culture.

Over a four-week span, professors of several disciplines from all over the country will meet in Michigan to hear speakers, trade notes and gather contacts. Mower made it clear that the main goal is for faculty to return to their colleges and implement what they’ve learned into their classes and research.

Bruce Waller, chair of the department of philosophy and religious studies, talked about the importance of Mower leading the moral psychology program.

“This is the kind of grant that goes to the top people, to those most respected in their field, and that puts her [Dr. Mower] in that category,” Waller said.

He said the effect of grants like this can be contagious.

“Being a part of a project like this really has an affect on the faculty involved, making them better researchers, but it brings back an excitement to their campuses, to their students as well as to their [fellow] faculty that couldn’t be involved in the program,” Waller said.

Mower said this moral psychology institute will work hard to fight the marginalization of the humanities by administrations across the country.

Mower said these topics, and how they affect our moral decisions, are the main focuses of moral psychology research.

Mike Hripko, vice president of research at YSU, spoke very positively about Mower and the grant.

“She is wonderful. She had asked me about how this office could assist faculty going forward in the future,” Hripko said.

He said consistently writing winning grants represents a big step forward for research at the university.