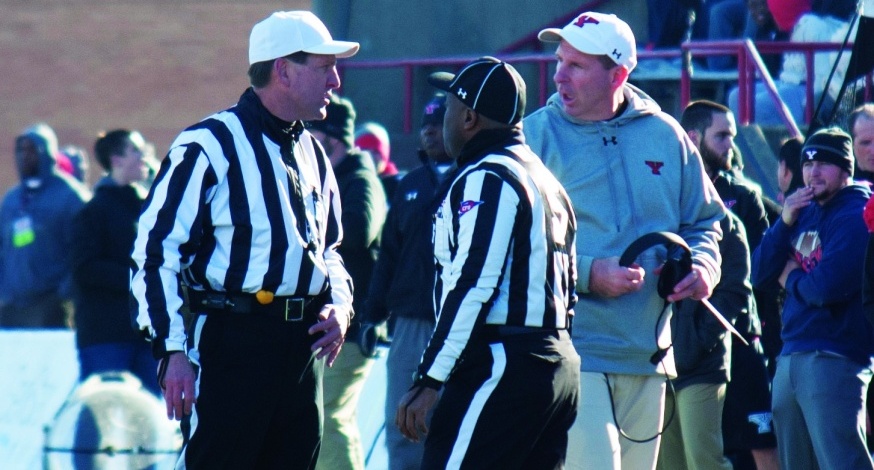 Pelini declined to comment on the conversation with the conference and any discussion about the penalties in the fourth quarter.

“I don’t concern myself with that … that was a difficult game to lose. [It’s] disappointing … I’ve moved on to Indiana State,” Pelini said.

Pelini said the team made progress on Saturday and the team had opportunities to win the game. He went on to say the game came down to a lack of execution on several plays late in the game, but the team should still be proud of how it played.

“I thought we played pretty well up front on both sides of the football. I think we held in there. It was a battle. I thought our team played physical and played hard … I thought we played well,” Pelini said. “I thought we walked off the field Saturday a better football team than we did the previous week, and that’s always your goal. We were a play away, making a play here and there that could have changed the football game. I told our kids they could look themselves in the mirror and feel good. They played hard.”

Now the football team is ready to put the loss behind them and focus on YSU’s upcoming game against Indiana State University. Pelini said the team played hard on Saturday, but following a tough loss, he wants to see the team refocus and get better heading into the final game of the season.

“I want to see them respond, and like I said yesterday, I think it will test the maturity of this football team,” Pelini said. “It’s part of life — you have your disappointments. We need to be a better football team on Saturday than we were this past Saturday. I think we made significant progress over the past month or so and that needs to continue, and next Saturday gives us that next opportunity and that’s all you can control. You can’t control what’s happened. You got to man up and take care of business.”

ISU and YSU’s seasons had many similarities. Both teams were top-10 teams in the Football Championship Subdivision rankings early in the season, but after losses late in the season, both teams will miss out on the playoffs.

“I think they’re very aggressive defensively — they’re physical. Offensively, they got a young quarterback that’s made a lot of plays and thrown for a lot of yards,” Pelini said. “They got a couple good wide receivers that have caught a bunch of balls. They spread the field on you, and I think they’re well balanced — run and pass. I think they do really well … a well-coached football team. I have a lot of respect for the coaching staff over at Indiana State and how they go about their business.”

YSU running back Jody Webb said the team’s goal this season was to make a playoff run, but with the postseason out of reach for the Penguins, the team is focused on getting a win in the season finale for the members of the senior class.

“All year, that’s what we were playing for,” Webb said. “Some things didn’t go as planned, but our team, we’ve come together. And that’s what we wanted all along. We’re brothers, we’re a brotherhood, we’ll all fight together and we’ll put it all on the line for each other.”