A small circle of young women sit together stretching while simultaneously cracking jokes and discussing how their day went.

The group does not possess a particular look. They range in size, ethnicity, stature and race. No two women look the same, but those characteristics do not seem to hinder the very thing that has brought them together: rugby.

Beginning in the fall of 2017, The Youngstown State University women’s rugby team was the first of its kind in Youngstown. The team is considered a university club sport, but travel to play in tournaments and matches against other schools just like a typical NCAA team would.

Jeff Horton, YSU women’s rugby coach, began development of the team in the spring of 2017. His experience with rugby stretches back to his high school days playing at Hudson High School in 2001. He later on went to coach the Kent State University’s women’s rugby team in 2009.

Since 2016, he has become the Assistant Manager for the USA Rugby Women’s National Team, as well as continued his coaching career with the Ohio Rugby Selects, Midwest Thunderbirds and YSU.

Horton said having the opportunity to coach a women’s team is a “phenomenal experience.”

“In my personal opinion, women tend to be more ‘coachable’ than men and their work ethic is off the charts. The current team at YSU challenges my staff and I to be the best version of ourselves each and every day, forcing us to be extremely efficient in how we communicate,” he said.

Although the team is still fresh, they have been no stranger to achievement on the field. Multiple team members have been recognized for their excelling performances and have played on all-star teams.

But with achievement, there are also challenges that come with a hard-hitting sport such as rugby.

Horton said one of the many challenges he has faced as a coach is the lack of resources but noted YSU has been obliging with the team’s needs and has subsequently aided in the rapid development of the team over the course of the year.

“The biggest challenges as a first-year program are creating campus awareness and recruiting. These challenges are forcing us to put our best foot forward and our hard work has been paying off, as we will be welcoming a recruiting class of at least 11 new athletes onto campus, come fall 2018,” Horton said.

Despite the challenges the team has had to overcome, the surprising aspect is a majority of the team members had no prior experience playing rugby before joining the team.

Hannah Hall, a member of the YSU rugby team, revealed she wanted to run track, but she unexpectedly turned to rugby instead.

“One year ago, I would have never thought I would be playing rugby; but never be afraid to try something new. I didn’t know how to play rugby, but the aspects of the sport were simple to pick up on and had a nice flow,” she said. 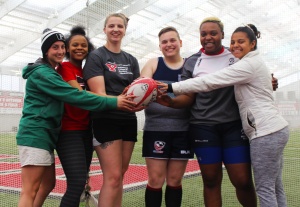 Saralynn Davis, a former swimmer at YSU and current rugby player, did not know how to play rugby as well.

She had never played a ball sport in her life and after she left the YSU swimming team, she was recruited by the rugby team in the fall semester of 2017.

“I have only ever participated in individual sports and I didn’t know how to play rugby, but I wanted a structured team environment so I decided to give it a try,” Davis said.

Another player who lacked a rugby background was Megan Feldhouse, a freshman at YSU and current member of the women’s rugby team. She expressed she didn’t have a sport in college and wasn’t particularly good at basketball.

One day her roommate informed her that the women’s rugby was recruiting players so she decided to try out and ultimately made the team.

“Rugby has turned into my favorite thing to do. I’ve made so many friends through this team, and it has taught me that putting in effort and working hard is the best way to succeed,” Feldhouse said.

The team currently has eight members with 11 incoming players in this upcoming school year’s recruiting class. Although the team seems strong in numbers now, that was not always the case.

Ja’Kenya Clancy, a YSU rugby player, played with the Youngstown Steel Valley Rugby Club before joining the team at YSU. She revealed the team originally started with three players, but with the help of recruitment, five more women were able to join.

She said her favorite aspect of rugby is that it is a sport that does not discriminate.

“When it comes to different sports, you have to look a certain way. With rugby, it doesn’t matter what race you are, your sexuality, size or weight; this sport fits all different types,” Clancy said.

One of the most challenging lessons Clancy had to learn was to know when to turn it down a notch and work together with her teammates.

“I’m a very dominant individual, so to take the back seat during a match is a very different role for me, but it ultimately makes you a versatile person,” she said.

Respect plays a major role in the game of rugby. Despite being a contact sport, Hall said players are happy afterward and a social hour is held after matches in order to meet the opposing players.

“There’s no trash talk. It’s all about respect for each other whether they win or we win,” Clancy said.

When they aren’t winning matches, the players are out volunteering around the community, such as picking up leaves with the Boys & Girls Club of Youngstown.

Horton said the ultimate goal is to make his players well-rounded individuals on and off the field.

“Before anything else, I love being able to empower our student athletes to make quality decisions both on and off of the pitch,” Horton said. “At the end of the day, there is nothing more rewarding than seeing people reach their fullest potential and ‘do the impossible’.”