Despite falling short at the American Moot Court Association’s national tournament in Dallas, the Youngstown State University Moot Court team proved again why its members rank among the nation’s best.

The Moot Court team sent six of its 20 members to the tournament. Mellicent Costarella, Isabella Davis, Brian Duricy, Erik Glasgow, Audrey Schoenike and Marissa Snyder all advanced to the second day of nationals.

Attorney Ron Slipski, a political and international relations, criminal justice and forensic sciences lecturer and moot court coach at YSU, said he couldn’t be any prouder of the results.

“We pride ourselves on being fair competitors. We will not do anything to win, we do it with ethics and professionalism,” Slipski said. “Our students are professional, they’re ethical and they do it the way it’s supposed to be done.”

The team is ranked sixth in the nation and has enjoyed much success over the last few years, a testament to each member’s individual talents, Slipski said. Each team member is required to deliver an extensive oratory on their respective cases. 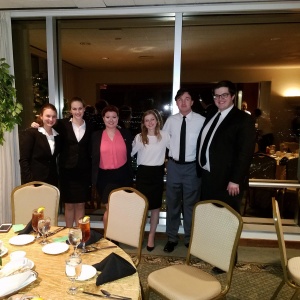 He said the major component that most students learn from the activity is public speaking.

Paul Sracic, professor and chair of the department of political science and international relations and moot court coach, said the experience working with the students has been incredibly rewarding.

“You get to see how the students grow and evolve over the course of a semester and year to year,” Sracic said. “It’s one of the most enjoyable things I’ve done as a professor.”

For the YSU students who qualified for the national tournament, the experience won’t soon be forgotten.

Glasgow, whose trip to Dallas last weekend marked his fourth appearance at the national tournament, said the experience was incredible.

Glasgow and his partner, Duricy, said the case argued takes place in the fictional 51st State of Olympus. While the case itself is imagined, it usually seeks to address a possible future legal issue.

“The case we argued this year had to do with an advanced technology that could read brain waves and determine if someone had memory or recollection of a place when shown a picture,” Glasgow said. “This technology was then used as evidence to convict and sentence the petitioner to 30 years’ solitary confinement in a super-max prison for the rape and torture of his victim.”

Since each team is required to argue both sides of the case, Glasgow said as the petitioner, his team argued the advanced technology and the sentence in solitary confinement violated his client’s fifth and eighth amendment rights. As the respondent, they would argue the technology and punishment were both constitutional.

Duricy qualified for the second time to the national event. He said the academic benefits are a huge bonus, but spending time with the team is the most important.

“The academic benefits from intensely learning famous Supreme Court decisions and using them to build logically sound arguments is obviously a huge plus in the activity,” Duricy said. “But as with all speech-adjacent things I’ve done, it’s the traveling and enjoying different places with my teammates that’s irreplaceable.”

Duricy said he and Glasgow lost to last year’s national champions, a team from Patrick Henry College, by a 3-2 decision. Despite the loss, Duricy said it’s hard to complain about how everything turned out.

Snyder, who qualified for the first time at nationals, said the opportunity to represent YSU was nothing short of amazing; however, the wait for results wasn’t.

“The experience was equal parts horrifying and exciting … It was a lot more pressure than at regionals, but I tried to enjoy myself since I knew it would be my last time because I’m graduating in the spring,” Snyder said.

“Who wins these events is really up to the subjectivity of each judge, so it’s best not to be too hard on yourself but to remember that there’s always room for improvement,” Snyder said.