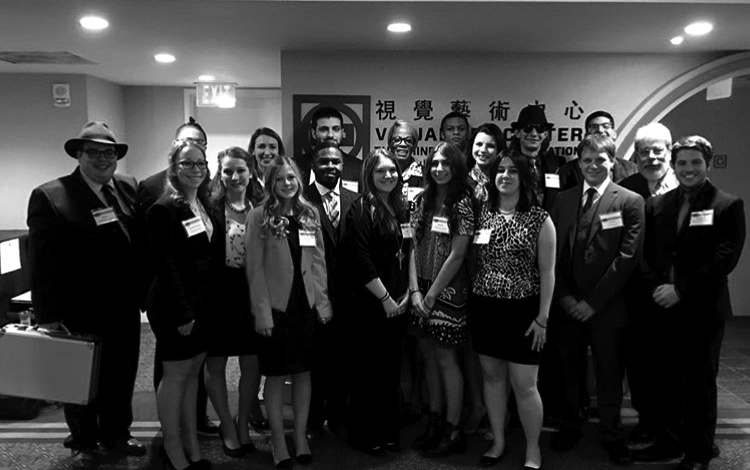 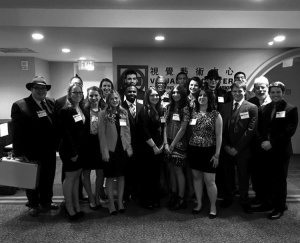 YSU student Jillian Smith said it provided a true situation of what actually goes on international forums. Preparation for the conference involved a lot of research.

“We had to … figure out the personality of a person, a country or an organization all based on past history,” Smith said. “Then taking this personality and putting it through all these different situations that arise.”

She said she enjoyed getting inside the heads of decision makers and trying to follow them to logical conclusions.

“As a political science major, it is valuable to learn how to best speak and appeal to the most important point to an individual,” Smith said. “It’s research based and based in practice.

“It was such a true simulation of what actually goes on in some of these forums. We were watching things happen in real time, seeing our thoughts being communicated in these forms of social media, and it was right there.”

Jordan Wolfe debated as Arne Duncan, former secretary of the U.S. Department of Education in a committee called “Obama Unleashed or Rejected: The Cabinet of the United States.” Wolfe became vice president of the United States during the simulation and received a verbal commendation.

“The committee demonstrated that YSU’s Model UN can compete at the highest of levels against elite competition,” Wolfe said

Model UN has been expanding at YSU. Wolfe said he joined the organization to improve his oratorical skills and compete with elite students.

“I was able to debate against some of the top delegates across the country,” Wolfe said.

He also praised David Porter, professor of political science at YSU, for giving him effective advice.

“He has been the adviser for several decades and has witnessed delegates place at a multitude of conferences,” Wolfe said.

Porter said YSU has one of the strongest Model UN programs in the northeast. They have won over 300 awards since 1984.

“We are considered the underdogs, and I think that makes us work harder,” Porter said. “You can see a determination that they are going to stand up to the bar, and they are going to be respected and do well. We are competing with some of the largest institutions in the country, and we are on an equal playing field.”

This was the first conference attended by YSU student Tabitha Richmond, who said she had a wonderful experience and put in a lot of hard work.

“It’s not something to slack off at, but it is worth the experience,” Richmond said. “If anyone has the opportunity to join this group, I would tell them to do it, because there is no chance they would regret it.”

YSU Model UN is holding a conference for more than 350 high school students in April.

Disclaimer: Jeff Bash, a member of Model UN, is an employee of The Jambar, but had no hand in the reporting of the story.