Idora Park opened to the public in Youngstown on May 30, 1899, becoming a historic part of the community.

In response to newfound interest, the Youngstown Park and Falls Street Railway Company decided to build an amusement park on the city’s south side. The result was a major success.

Rick Shale, the author of “The History of Idora Park,” in an article posted on the Mahoning Valley Historical Society’s webpage, detailed a brief history of the park’s massive success. 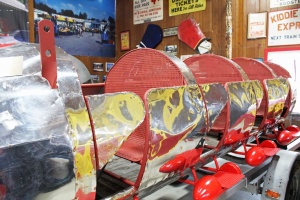 According to Shale, the park’s immediate success called for expansion. In 1902, Idora Park introduced its first roller coaster. As the park became increasingly popular, outsiders took note. Idora Park made its name on the national stage. He said music played a big part in that.

“Music of all types played a significant role in Idora Park’s history, and the park’s success was due in part to its policy of booking top attractions,” Shale said.

In 1918, John Phillip Sousa performed at Idora, and would become the first of many renowned musicians and groups to perform. Other significant musical acts of the early days included Benny Goodman and Cab Calloway.

As music tastes shifted from big band to rock and roll, the park began to book new groups, including The Eagles and The Monkees.

Despite the musical influence, it wasn’t the only major draw.

In the article, Shale details the role athletics played as well.

During the 1920s, the Cleveland Indians and Pittsburgh Pirates played an exhibition game at the park. Other MLB teams, such as the Brooklyn Dodgers and Boston Red Sox, also participated in exhibition games. 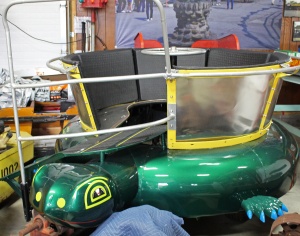 “By 1920, Idora Park had the only fenced-in ball field in Youngstown, and the city’s premier semi-pro team, the McElroys, used Idora as their home field,” Shale said.

In July 1920, the legendary John McGraw brought his New York Giants to Idora. Though the New York lineup included five future members of baseball’s Hall of Fame, the McElroys won 8-2 marking the first time a local team had ever defeated a major league club.

Additionally, Shale said Idora became a frequent stop for the Negro Leagues, as teams including the Homestead Grays and Kansas City Monarchs made occasional stops. Their stops proved to be a hit with Youngstown’s African-American population.

Idora became well-known for its family-friendly atmosphere. Admissions were free and every park corner had entertainment options.

During the 1970s, Youngstown’s economy weakened, but the park remained popular. However, the fire in 1984 changed everything.

Bill Lewis, photographer for The Vindicator, recalled covering the fire more than 30 years ago.

“I worked for the Tribune Chronicle at the time, and we got a phone call one day and somebody said Idora Park was on fire,” Lewis said. “I took a reporter and we drove down there, and it was one heck of a sight. The roller coaster caught on fire.”

Lewis said he attended the park as a “youngster” during the 1950s and 1960s and was devastated by the park’s end.

“It was sad to cover the fire and see it happen,” Lewis said. “I had many fond memories. I know others did as well.”

Despite the 1984 fire, the park remained open. The owners, however, announced 1984 would be its last season. Idora Park would close.

In 1993, Jim Amey returned home from his military service. For Amey, Idora Park was an important part of his life. It’s where he worked, met great people, developed friendships and serves as a place where he recalls fond memories. 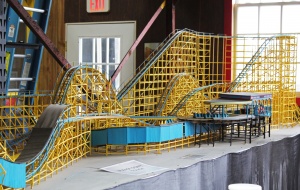 “The last time I had been to Idora Park was 1976 because I worked there,” Amey said. “When I returned, I asked my wife, who is not from the area, to walk through Idora Park with me and I was pretty devastated by the destruction. It was very clear to me then that Idora Park wasn’t coming back.”

Amey said a lot of the park’s buildings and rides still stood. There were several items he wanted to take, but couldn’t.

“There were definitely some things I wanted to take, but they weren’t mine obviously,” Amey said. “I did manage to take a light switch from a game I used to run back when I worked there. I wrote Idora Park on the back of it and kept it for years.”

The light switch collected by Amey would become the first of many Idora artifacts.

“Our career started to takeoff, and that’s when I felt the need to gather anything I could find from Idora Park,” Amey said. “I was really disappointed that no one had done this in the past.”

On Labor Day, Sept. 3, 1984, the park officially closed itself to the public. In October, items were auctioned off. This was the end of Idora Park. That’s where the Ameys came in.

“Idora Park was such an important part of our community, and it helped grow the community and give people jobs,” Amey said. “Right in our neighborhood was an amusement park, and nobody was doing anything to honor the memory of it. By collecting as many items as we could, we were trying to rebuild Idora and bring memories back.”

As their collection grew, they moved back to Ohio from the Washington D.C. area, and built a 4,400-square foot building to display their Idora Park artifacts. Their museum, located in Canfield, was named The Idora Park Experience. For Amey, the reviews have been nothing short of incredible.

“We’ve had some people coming in and crying over seeing everything,” Amey said. “People who had not seen each other in over 65 years actually ran into each other there, and they were hugging and crying over memories of Idora Park. It gave me a feeling that we are doing something meaningful for the community.”

Amey said the public’s response has been incredible. 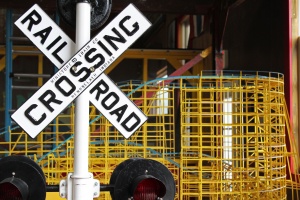 “When people come and tell us what they think, it really is an amazing feeling,” Amey said.

Flashing back to the 1970s, Amey ran several games as an Idora Park employee. Idora Park always meant a lot to him, which is why restoring it has been an incredible journey for him and his wife.

“There’s an incredible story behind everything we find,” Amey said. “Years ago, the three Baby Wildcat rides, built in 1936, disappeared. Finally, I found them; a guy had them on top of an ice cream shop in West Virginia, and we had to rent a crane to get them down. It’s crazy stories like that that make it a lot of fun.”

Amey also recalled driving 2,300 miles to and from Florida to grab an Idora Park item. Two weeks after, Amey and his wife were notified of an item in Alabama, and drove to and from there as well. The entire journey for both was some of the most fun they had collecting these artifacts.

For Amey, the experience and journey has all been worth it. The Idora Park Experience allows people to journey into the past to relive some of their greatest memories. Thanks to Amey and his wife, all of this is possible.