A journalist, a group of brave women, an activist and a movement that shook the entertainment industry: these are what catapulted the awareness of the #MeToo movement, and the magnitude of sexual harassment and assault happening every day.

On March 23, Tarana Burke and Ronan Farrow visited Stambaugh Auditorium as a part of the Youngstown State University Centofanti Symposium. Before speaking at 7 p.m., Burke and Farrow hosted a private question and answer session between themselves and students from YSU.

Ronan Farrow, a journalist for The New Yorker and NBC who initially broke the Harvey Weinstein sexual assault scandal, mentioned that it was the first time that he and Burke have sat down and worked together.

A reporter for the Business Journal asked why Farrow was the one to break the Weinstein story and what took the victims so long to come forward. 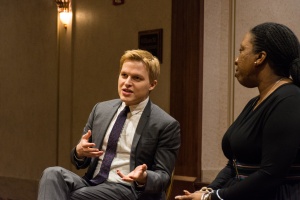 Farrow said the story was bound to boil over soon into the public eye, especially because of the events happening at the time such as the Women’s March, Bill Cosby going to trial for sexual assault and President Donald Trump coming into office.

“The story revealed the good, the bad and the very ugly of how the media can either help or hinder justice on this issue. And for a long time we saw media outlets conspiring with predators to silence people who spoke the truth,” Farrow said.

Burke, the civil rights activist associated with creating the #MeToo movement, said there is so much more to the story than just Weinstein and wants the media to tell different stories other than just writing about the Hollywood producer.

Burke also shared her annoyance with the media’s reluctance to label Weinstein as a rapist and utilizes terms such as “misconduct” instead of assault, harassment or rape.

“I still have trouble calling the Weinstein sexual harassment in the workplace. And when you have stories that are at the magnitude of what this person did … This is somebody who is certainly a serial predator,” Burke said.

In order for sexual assault and harassment to decrease she suggested instead of focusing on the assailant, the narrative has to shift to the survivors.

Mara McCloud, a political science and history double major, asked the speakers what the long term impact and ultimate goal of the #MeToo movement would be.

Burke said they hope to see society support survivors instead of shaming them and expand the conversation about sexual violence.

“No one can ignore this problem right now. The numbers are rising and the conversations have been sustained for too long. I want people to move away from the idea that this movement has to be validated by the media and not by the people,” Burke said.

When discussing victims coming forward, Burke said no matter what, she never pushes victims to reveal their #MeToo stories to the public unless they wish to. 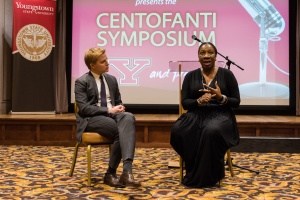 Farrow told the students that during the development of the Weinstein case, Farrow encouraged a source to go public with their information to show the public that the story was much larger than ever imagined.

He also said to the source that coming out about their sexual assault could prevent it from happening to others.

“This was a case dealing with a sexual predator and the case I made to [the victim] was that other victims have come out and said ‘I wish another woman would have warned me,’” Farrow said.

Farrow and Burke ended the event by telling the students that the younger generation will need to talk about sexual violence in order to shift the narrative.

“Do not underestimate how coming forward can change your life, in both a good and bad way, but it can become a healing and empowering experience,” Farrow said.