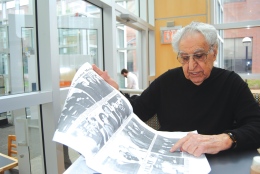 Harry Meshel shared his memories and photographs with celebrities, musicians and politicians on Monday afternoon at Collections Cafe. Photo by Kacy Standohar/The Jambar.

Before Harry Meshel was a member of the Youngstown State University Board of Trustees and president of the Ohio Senate, he spent his time chasing his passion for jazz music.

In his 87 years, Meshel never once picked up an instrument, but knows what jazz music is supposed to sound like.

He learned by watching the greats.

“We had a family violin, but everyone in the family learned but me,” he said. “I followed music closely from the time I was a young kid.”

Meshel has met famous musicians and politicians, and has traveled to 28 countries around the world.

He loved to dance. At the age of 15, he often stayed at after-hour clubs where jazz musicians would play until 2 or 3 a.m.

After graduating high school at 16, he followed jazz musicians and attended performances in the Youngstown area.

“There were big band jazz groups and small group combos,” he said. “It depended on the night, but there was polka, Italian and other sorts of music, too.”

In 1943, Meshel was overseas in the service, but continued his collecting of records and tapes. He said he didn’t have a camera or radio during World War II, and the only jazz music he could listen to was the occasional broadcast out of Japan, which was meant to make the American soldiers homesick.

Art Tatum, Harry James, Charlie Parker and Miles Davis were among the many Meshel encountered and enjoyed.

“They were instrumental geniuses known throughout the world,” Meshel said.

“These musicians used to get together at the Elms Ballroom — where Kilcawley Center is today — and just have jam sessions,” he said.

“They would all play together and take turns.”

Meshel said he and his friends would often go to jazz clubs in their Sunday best. He said the clubs were low key, but expensive.

“It was giant. It could hold hundreds of people dancing. The women were dressed up and wore high heels,” he said. “We made up a lot of our own moves, and we did the jitterbug and the boogie-woogie.”

Though Meshel has met Frank Sinatra, Dean Martin and Sammy Davis Jr., he is most proud of his donating three sculptures that stand in the Butler Institute of American Art.

The sculptures are of Miles Davis, Charlie Parker and Dizzy Gillespie — American jazz musicians, composers and performers in the 1940s.

Kent Engelhardt, associate professor of jazz studies at YSU, said Meshel has an intellectual approach to jazz music and is a strong supporter of the jazz program.

Engelhardt said he often discusses ethnomusicology, the study of social and cultural aspects of dance and music, with Meshel to apply in his classes.

“Everything that surrounds the music is important. The culture is a part of it,” Engelhardt said. “It’s nice to talk to Harry because I can get a feel for other things besides the notes in the music.”

Al Bright, professor emeritus of the art department, said Meshel was a jazz aficionado on the forefront of the historic jazz movement in the Mahoning Valley.

Bright, 72, paints to live music and said Meshel was instrumental in helping him receive a grant to bring a famous jazz group to the area.

Bright, who retired in 2005, said students shouldn’t forget the jazz foundation, even though music has evolved.

“We should be proud like Meshel because jazz is America’s only original art form,” he said.

“He was able to take that kind of energy for music and apply it to his political career as well,” Bright said.

Though Meshel has traveled the world, he said there is nowhere like Youngstown.

“I’m proud of Youngstown. Hell, I had a condo down in Marco Island, but I sold it,” Meshel said. “I didn’t find enough people down there that

I enjoyed spending time with. Youngstown was a great stop for big bands, and now the area is a great university.”