The Youngstown State University men’s tennis team (18-7, 5-2 Horizon League) are getting ready to enter the Horizon League Championships. Before it enters that, we all must address the fact that the previous record for wins at YSU was 16. YSU currently has the record at 18, which was done this season.

“It’s my first semester here and I’m sure what type of team we had before,” YSU sophomore Danylo Veremeichuk said. “We have some of the most talented players in the conference. Every one of us gives maximize effort in every match. We all have the same purpose and same drive to win as the rest. It happens that whoever are the six people in our lineup are the best that day.” 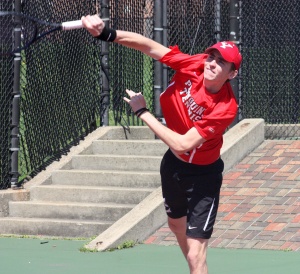 Veremeichuk also said that the team’s winning is based off of how the coach thinks day to day. He also said the team is just doing its job.

YSU is taking a great streak into the Horizon League Tournament. It has won its last six of seven matches and have won nine out of its last 12 matches.

“That’s obviously a great achievement for this team and well deserved,” YSU head coach Mickael Sopel said. “The guys put a lot of work into this season. They worked every day at practice and we have such a great, talented team. We are very young but quite talented. It is one more stepping stone for this group.”

Sopel also said that this feat was one more benchmark that it wanted to achieve and it did so easily.

“It has been awesome. This is my favorite group of guys I’ve had,” YSU senior Mitch Maroscher said about being the only senior on the team. “It’s really exciting. There are a lot of fun personalities on this team. I think will be something that we as a team will always remember. Maybe hopefully, they can break it again.”

During this record-breaking season, YSU was very consistent. It won eight matches at home and eight matches on the road with two neutral-site wins along the way.

“Breaking the record was never really a goal for us,” Sopel said. It just happened because of how well we have played. It was great but our goal was always to win the conference. We are on track to do that and are still ready to do that. Breaking our conference win record was more important to me. We got five wins in the conference and were tied for second.”

Sopel said that because the team had never done that, he was very proud of winning five matches in the Horizon League this year.

Also as part of this season, sophomore Gabriel Tolesani was named to the Horizon League All-Academic team. He also had double digit wins for the first time in his career.

“This truly has been an incredible season by far,” Sopel said. “The way it all came together was great. We worked hard and knew that results were going to follow. This is the first time reaching those benchmarks and that’s really big for us.”

YSU will have to play Northern Kentucky University on April 28 in Ann Arbor, Mich. YSU defeated NKU on April 2 by a 5-2 score.

“We went through a lot of tough battles,” Maroscher said. “All these matches have just made us stronger, both physically and mentally. When comes time to perform, we will take care of business. Momentum is really important for us.”

Maroscher said that momentum gives this team a lot of confidence and that is exactly what it needs going towards the Horizon League Championships.