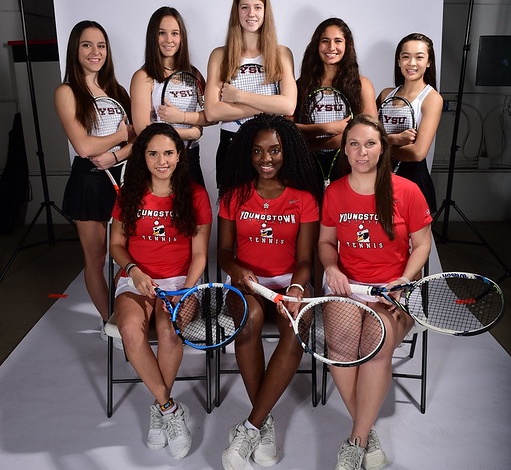 Despite the records each team has, the Youngstown State University’s Men’s and Women’s tennis teams have some of the strongest rosters that head coach Mickael Sopel has ever had at the university.

For the guys’ team, the Penguins started the year with some tough losses with a 4-3 loss at Duquesne University and a 4-3 loss to DePaul University at home. They got their first win of the year over Alabama State University, 4-0, at Southern Mississippi University.

The Penguins would lose three straight matches after that win.

“We have a difficult schedule every year out of conference,” Sopel said. “It’s never easy to get extremely good records. We have a team that is quite new compared to last year. We didn’t have a lot of adjustment time to get everything together. The last two months we have been playing better and better. The last match against LaSalle was pretty convincing. I’m excited to see this group go against Green Bay this weekend.”

After starting the year with a 1-5 record, YSU recovered tremendously. First, it was a 7-0 victory over Niagara University on Feb. 16 followed by a close loss to Carnegie Mellon University, 4-3. The Penguins then rattled off three dominating victories against Bucknell University, St. Francis and St. Bonaventure University.

That string got the Penguins back on track. They have won five out of their last eight matches as they roll into Horizon League play with a 6-8 record so far.

“It’s a matter of getting the team together and getting the dynamic going,” Sopel said. “It has been getting better and better with each match. I think the boys are in good shape so far. We have one of the strongest rosters since I’ve been coaching here. We have a shot of being able to win the conference this year. I think the guys know that and are ready to get after it.”

On the women’s side, it has been an eerily similar season so far. The Penguins started out quite rough as they didn’t win a match until the second week of February. YSU lost its first seven matches including a 4-3 loss to Colorado State University on Feb. 10 before its first win on Feb. 11 against the University of California Riverside, 4-3.

That win sprung a five-game win streak to end the month.

“When you look at the past five years, we’ve always struggled in February,” Sopel said on the women’s start to the season. “This is actually the best year we’ve had in that month. It’s one of the best we’ve played before having conference matches. Once again, we are playing tough teams. I don’t schedule easy. It’s a hard schedule before conference. If we stay away from injuries, we will be fine because we have such a good group. This is also one of the best groups I’ve had. One through six, we are very strong. There are no spots that are weak and we can win with anyone. That is pretty rare.”

YSU won the conference last year which was the fourth straight year that the Penguins won the Horizon League. If this truly is the strongest team coach Sopel has had for a while, the team very well could be in line for a fifth consecutive championship.

“We haven’t beaten Akron on the road since 2000 or something,” Sopel said. “We beat them 4-3 in a very strong match. It’s very exciting. We lost 3-4 to Seton Hall with two important girls injured. We are playing better at this time of year than they have in many other years.