Men donning red high heels walked and sprinted for a mile to raise money and show their support for victims of sexual violence at the Watson and Tressel Training Site on April 21.

Along with the red heels, the participants wore shirts that read, “I am man enough to walk a mile in her shoes.” 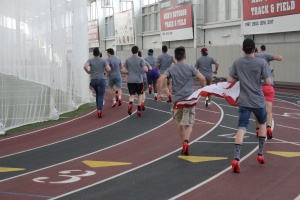 The proceeds from this event will benefit the Young Women’s Christian Association, which works towards eliminating racism, sexism and to empower women in Youngstown.

Not only did the event raise money, it also shows the community’s commitment towards stopping sexual violence, said Jay King, the Philanthropy and Fundraising chair of the Interfraternity council.

“This is our way of stepping out of our shoes and, symbolically, walking a mile in [the] shoes of women to help gain a better understanding of what it means to deal with the issues that many women face,” King said.

Sexual violence is a universal issue that affects man and women, Leah Merritt, president of the YWCA, noted.

Jon Burns, the vice president of Student Life in the Student Government Association, said students should participate in events like this because sexual violence is a prominent issue across the entire country.

Daniel Bancroft participated in the event and feels that it is important to speak out against sexual violence.

Brandon Lalama was one man that brought a smile to the faces of the bystanders. He decided to sprint the whole mile while wearing heels to see if it could be achieved.