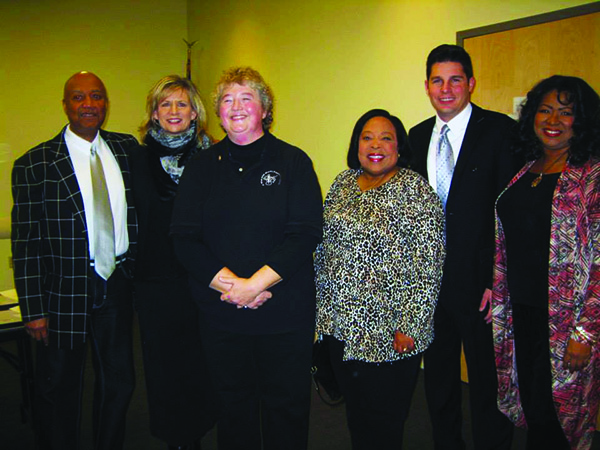 On Jan. 10, the A Way With Words Foundation, Inc. presented five members of the Mahoning Valley received the Presidential Volunteer Service Award for Lifetime Achievement.

The award is given by President Barack Obama’s Council on Service and Civic Participation to American citizens for individuals who have put an exceptional number of hours into volunteer work in their community.

Madonna Chism Pinkard, a part-time professor of communications and a community relations director at WFMJ, has volunteered with Big Brothers Big Sisters, NAACP, the Greater Warren Youngstown Urban League and the League of Women’s Voters, to name a few.

Pinkard expressed her gratitude for the award. Her passion for volunteerism kick-started after winning an award for her work with Big Brothers Big Sisters.

“By winning that award, I got $1000, and I donated that to Big Brothers Big Sisters for their bowl-a-thon, and the ball started rolling there, literally,” she said.

Pinkard worked with a young girl named Sparkle during her time in Big Brothers Big Sisters. She shared a defining moment she had with the young girl.

“Sparkle was a troubled child. One night I was on my way to the Maag Library and I had Sparkle with me. I was teaching her how to study and understand that a library was a good environment to study,” Pinkard said. “As we were going down Market Street, we saw a prostitute and Sparkle went crazy. She said, ‘there is my mother; there is my mother.’”

Though Pinkard was incredulous at first, when Sparkle tried to get out of the moving car, she turned the car around and pulled closer.

“And on the corner of Delason and Market Street was Sparkle’s mother, for real. I didn’t know what to do, and she is enamored because she sees her mother,” she said. “‘I said, ‘Excuse me, my name is Madonna Chism and I matched up with your daughter in a program called Big Brothers Big Sisters, and she insisted that she saw you and that I turn around. I don’t mean to bother you.’ She said, ‘It is okay. I haven’t seen Sparkle in a long time.’ So, she hugged her, and she was like, ‘Okay, now you got to go.’”

Pinkard was able to help Sparkle’s mother get into a restive program at A Place Where the Lord Lives, a church in Youngstown.

“Long story short, Sparkle got in touch with her mom. Her mother got off the streets, got off of drugs and started living the life that she should be living and got her children back,” she said. “Sparkle and I have been thick as thieves ever since. … We just clicked, and I feel like my input in her life made a change, not just for her, but for mother, her sister, her two little brothers. It was a terrible situation, but it ended up being wonderful.”

Anthony Spano, a parking facility attendant and the vice president of the YSU-ACE union, is the founder and executive director of the Hope Foundation — a nonprofit organization founded in 2007 that helps with the care of chronically and terminally ill children.

“We are not here to get awards; we are here to service the community, and we are here to give back,” he said. “You look at everyone you are standing next to who are very big movers and shakers of the Valley, and it is just an honor to be in the same room as those individuals. It is very humbling.”

He expressed gratitude to his fellow volunteers as well.

“If it wasn’t for the community as a whole, like I keep saying, I wouldn’t be where I am,” he said. “It is almost like they are getting this as well because they are the ones that helped push. You can have a face for something, but you still need to do the groundwork.”

Rachell Joy, a layout design artist in media & academic computing, said she used her passion for art and music in her volunteer experience.

“I volunteered quite a few times, doing music, for the American Cancer Society’s Relay for Life,” she said. “I volunteered down at the Juvenile Justice Center for Mahoning County, providing music therapy there.”

Joy said she was inspired to volunteer by her parents’ battle against cancer.

“That was one thing that motivated me a lot to go and volunteer and to help and raise the money for research,” Joy said. “

During the awards ceremony, the audience was told that volunteerism was actually down in Ohio over the past few years. Spano, Pinkard and Joy all shared their thoughts on how to encourage volunteerism.

“Never understatement that you can make a difference. … It can be something as small as reading to children,” Pinkard said. “There is so many things that you can do that can make an impact in this community and ultimately in the Valley.”

Joy reminded people that there is no necessary skill set for being a volunteer and any skill can be used to help the world.

“You look around and see this great need, and you just wonder, ‘Well, what can I do?’” she said. “Well my mom told me, ‘Well, do what you love to do.’ I really enjoyed music and singing and that is what I found myself volunteering to do, using music to bring comfort to people when they are struggling.”