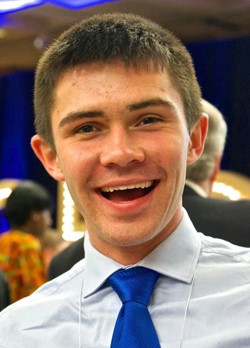 Allen Metz is the latest Youngstown State University student appointed to the Board of Trustees. He was selected by Ohio Gov. John Kasich to replace former student trustee Bryce Miner, whose term ended this spring.

Metz said he was motivated to apply by a deep sense of commitment to the university. He said members of the board are in a significant position to help YSU reach its full potential.

Metz is a junior studying biology and he plans to go on to medical school. He has leadership roles in the American Medical Student Association and the STEM Leadership society.

“I believe that my ability to manage student organizations, such as AMSA and AED, will help me tremendously on the Board,” said Metz.

Metz also stated that he would like to meet students on campus and discuss their concerns and criticisms about the campus environment.

“[I want to ensure] that I accurately represent the views of the greater student population,” Metz said. “Not just the views and issue that I most frequently encounter during my days as a student.”

Amy Cossentino, director of the university honors programs, said Metz had discussed the decision to apply to be a student trustee with her in November of 2015. She said he has maturity beyond his years, and his willingness to accept responsibility will be an asset to the YSU Board of Trustees.

“His work both within and outside of the classroom demonstrates his commitment to learning and ability to communicate,” Cossentino said.

Metz also volunteers over 60 hours a year, including work with the Rich Center for Autism on YSU’s campus. He said it made sense to get involved with the center because of its location, and there is a lot of good things the organization can do.

Metz said he looks forward to the experience and would even like to become a full board member once he is established in his career. He is well on his way, already having completed research with the University of Michigan to study the effects of deep vein thrombosis on patients.

He would like to serve on a hospital board at some point as well.

Carol Weimer, chair of the YSU Board of Trustees, said she’s happy with the timely appointment and confident in the vetting process that led to Metz’s appointment.

Samuel Grooms was also appointed to the board this spring to replace the seat that opened when former Ohio Sen. Harry Meshel’s term ended. The seat left open by the passing of Jim Greene has yet to be filled by the governor.

Metz will take the oath of office at the board’s September 15 meeting.