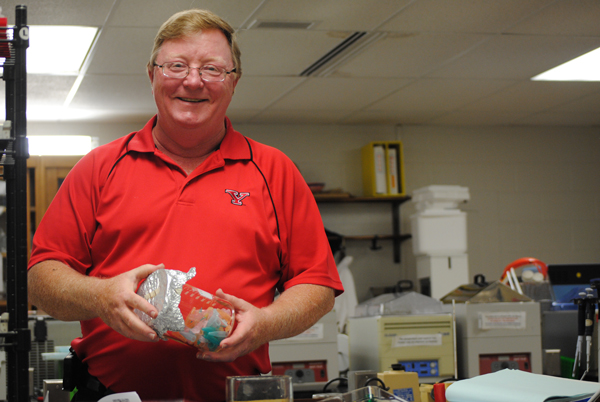 Chester Cooper, a professor in the Youngstown State University Biological Science Department, has had a long and colorful college experience, both as a professor and during his years as a student.
Cooper obtained his undergraduate degree from the University of Pittsburgh at Johnstown in Richland Township, a suburban area of Johnstown, Pennsylvania.
“I started out like most biology majors — wanted to be pre-med,” Cooper said. “Then I realized I did not like that part, I liked the science part.”
At one time, Johnstown campus was rated one of the top ten party schools in the United States.
“So you can imagine what the weekends were like,” Cooper said.
Cooper was a resident assistant for his large campus dorm that housed about 200 students. He became the dorms director once he was a senior and gained the power to approve parties that would take place in the dorm.
“The student council came to me and said they wanted to throw a campus party. The council made a great deal with one of the local beer distributors and wanted to get my permission to throw this party,” Cooper said. “The deal was they could buy 30 kegs of beer and the distributor will throw in 50 cases of Heineken for a specific price.”
Cooper approved the party if he could keep half of the cases of Heineken.
“I had this little apartment in the dorm. I stashed all 25 cases in my bedroom. So I had enough Heineken to last me my senior year,” he said. “Eventually, I heard about it from my boss. He wasn’t too happy. He wanted to know how I could approve something like this, and I told him that how could I pass it up when there is 25 cases of Heineken involved.”
After graduation, Cooper decided to further his career at the University of Texas at Austin where he obtained a master’s degree in microbology.
“I chose Texas because when I was doing undergraduate research with somebody at Pitt-Johnstown, I was studying a certain group of fungi and he knew of a professor in Texas that had a lab that worked with the same sorts of organisms,” said Cooper.
Cooper went on to get his Ph.D. in microbiology at the university and went out into the world to seek his fortune.
“When I graduated with my PhD I had a couple of options, but I ended up in Albany, New York. I worked for the New York State Department of health; there I ran a clinical lavatory of diagnosis of fungal infections,” said Cooper.
Cooper enjoyed his job but described Albany as an “old dilapidated city full of politics.”
“I used to say Albany was not hell, but you could see the gates from there,” he said.
Cooper stayed in Albany for four years and then was recruited by a scientist to go to Case Western Reserve University. Cooper was later involved with the University of Texas Medical Branch at Galveston in Texas. After seven years, Cooper left when the university fell into a deficit.
“My boss came to me and explained how I would be laid off in a year due to some excessive spending budget from previous administration, so I started looking for a job, and I couldn’t believe this was happening,” Cooper said.
Cooper then saw a posting for a job position at YSU.
“I came to Youngstown for the interview and he gave me an attentive offer and I was just waiting for the actual offer,” he said.
Once Cooper got back from Youngstown, his chair from UTMB, Dave, extended his lay off from a year to a year and half.
“Dave said the budget situation is getting better and I would like to extended you lay off. And I looked at him and said, ‘Gee, Dave, that’s really swell of you, but if you don’t extend my offer anymore, then the jobs I am looking at now isn’t going to be available then’,” Cooper said.
The next day, Cooper had a contract from the UTMB waiting under his door. But once he received the letter from YSU, Cooper said good-bye to Texas and hello to Youngstown.
“[That’s] how I became a professor at Youngstown State University,” said Cooper.