With social media at an all-time high, there is access to tons of funny pictures, videos and posts. But when does innocent joking turn into online bullying?

The definition of a meme is “a humorous image, video, piece of text, etc., that is copied and spread rapidly by Internet users.”

Many times these pictures and videos use an individual as the source of the joke, poking fun at that person’s physical flaws or appearance.

So is it overreacting to think these “jokes” are a form of bullying? 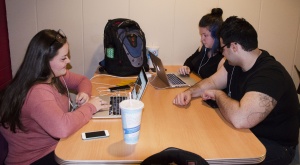 In 2016 Lizzie Velasquez, who suffers from a rare congenital disease that prevents her from gaining weight, wrote a statement on her Instagram page after becoming the face of a viral meme naming her “the ugliest woman in the world.”

Velasquez wrote, “Yes, it’s very late at night as I type this, but I do so as a reminder that the innocent people that are being put in these memes are probably up just as late, scrolling through Facebook and feeling something that I wouldn’t wish on my worst enemy.”

Velasquez has channeled the negativity she has received from others toward motivational speaking and is now an anti-bullying advocate.

She went on to write, “At the time you might find it hilarious, but the human in the photo is probably feeling the exact opposite.”

Dr. Ann Jaronski, the director of Student Counseling at Youngstown State University, said she has talked to many students who have experienced bullying at a younger age and still live with the effects.

According to Dr. Jaronski, bullying in the classroom and behind a screen in an adolescent’s life can lead to low self-esteem, poor self-concepts and can even impact student’s grades and interpersonal relationships.

Brandy Vela was 18 years old when she shot and killed herself in front of her parents after being harassed online. The harassment didn’t end there, the bullying continued after her death.

A fake Facebook profile was made using Vela’s name and image. Family and friends added the Facebook page thinking it was a memorial, but were quickly shown otherwise.

According to CNN, the person behind the page created cruel statuses and memes. One meme was a picture of Vela with the caption, “My face when you shoot yourself in front of your family.”

Since these posts are traceable, the culprits behind it will face criminal charges.

Tara Sydney, a coordinator at the Center for Student Progress, said there are state laws against harassment that could apply to online bullying.

According to Sydney, there is a certain criteria used to define bullying.

“It has to be deliberate, it has to be repetitive, something that keeps happening over and over again,” Sydney said. “Also, there is an imbalance of power.”

If you are a victim of harassment or cyberbullying, it may seem there is no escaping it. In today’s cyber-centric world, the ability to share a post or photo is not only endless but timeless.

“If you get bullied at school or work it stops there — you can leave for a little bit and have some freedom, but online is 24-hours a day, nonstop,” Sydney said.

Still, there are ways to cope with it.

Jaronski has several recommendations for coping with bullying, such as blocking the person online and talking to a trusted friend.

Brian Wells, Senior Academic Advisor at YSU, said he has deleted social media friends in the past after seeing their cruel posts. He even feels deleting social media completely can sometimes be a good thing.

“Getting rid of social media can help you avoid the effects of bullying,” Wells said.

Wells is an anti-bullying advocate and the lead coordinator for the YSU Safe Zone, a program designed to help combat bullying and harassment on campus.

“We as people need to not be afraid to say ‘this isn’t cool,’” Wells said. “We need to speak up.”

If you are being bullied or harassed, there are people who want to help. Talk to your family, friends or reach out to a YSU counselor in the office of counseling services located in Jones Hall.