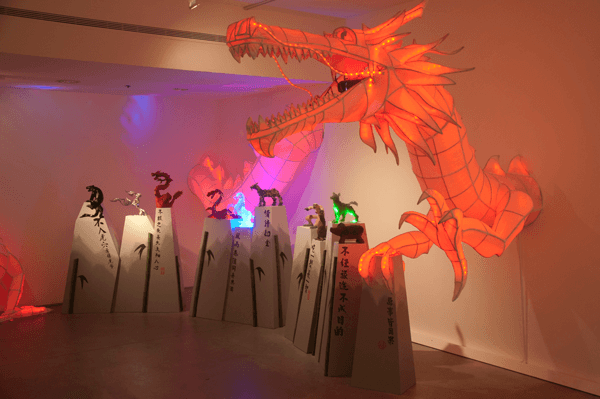 From Nov 22 through Dec. 14, the John J. McDonough Museum of Art is presenting the bi-annual Youngstown State University Graduating Bachelor of Fine Arts Show, featuring 19 graduating art students’ pieces.
The show will include styles spanning graphic and interactive design, painting, photography, and 3D studies.
Ryan Johnson, a YSU double major in 3D studies and art education, said he has a piece in the show that he has been working on since last spring.
“The piece I have in the show is a 15-foot tall steel chandelier called ‘drop of life,’” Johnson said. “The overall form of the piece is a giant drop of water made from three clear resin-cast female figures, forged steel round stock and 36 candles in glass votive holders. It’s suspended from three large steel rings and hangs above a ground component shaped like a splash. The splash is a contour linear construct made from steel and it holds a spiral mosaic within it made from over 60 custom-cut mirrors.”
Zachariah McCartney, a graphic design student, said he contributed a multiple piece exhibit to the show.
“There were 10 pieces in my exhibit. The one I’m most proud of is the logo I did for Team Vulcun. Team Vulcun is a League of Legends professional gaming team,” McCartney said. “When I approached the project, I took into consideration what the team was looking for in a logo. Vulcan — team spells it as Vulcun — is two things. It is the name of the Roman god of fire, as well as a high tech fighter jet. In selecting a mascot to represent the team, I combined the fighter jet with the god of fire and arrived at the bird of fire, a phoenix.”
Brian Gigliotti, a YSU art student who specializes in sculptures, created a piece with several animal sculptures displayed on pedestals, with the entire piece encircled by a Chinese dragon lantern. Gigliotti said that he created his piece after spending time teaching young students in China.
“I guess it all started because I went to China,” Gigliotti said. “Obviously, it inspired a lot of my work. I wanted to portray the Chinese experience. I just took each of the zodiac and used either a natural element or an element representing some part of the Chinese culture. I wanted to do each [sculpture] differently.”
Leslie Brothers, director of the McDonough Museum of Art, said that the show is a graduation requirement for studio students as well as graphic design and interactive students. The show allows them to get a level of exposure most other universities don’t offer.
“There is a senior seminar and a senior project, and the product is this exhibition at the McDonough,” Brothers said. “It is an exceptional opportunity to exhibit their work in this substantial institution. Our students have the good fortune of being able to have their final exhibition at the McDonough Museum of Art. … It is unusual to have a real museum to show their final work in. That is important to us; that means a lot to us.”
Johnson said the publicity he has received from the display and the Nov. 22 reception has helped to open several new doors for him.
“I did, however, have an art dealer offer to sell the piece for me in Florida,” Johnson said. “I spoke with multiple people that wanted to talk in the future about commissions and work. Without having the art on display at a place like the McDonough, I most likely wouldn’t have made as many of these connections.”