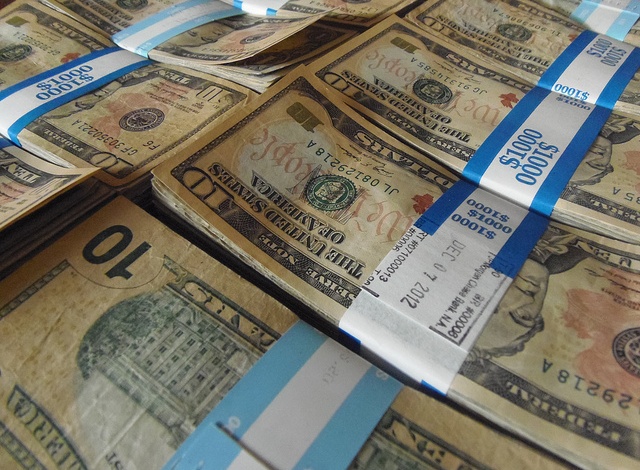 Amber Tisdale, a graduate student in the American Studies department, has learned how to manage money after starting to pay all of her own bills.

“I have to make the choice between getting a new outfit or paying my rent,” Tisdale said. “I’ve never had to say I can’t have this thing because I have to pay my rent before. It’s kind of hard sometimes, but I know the rent is more important.”

Some students don’t have the same mindset to set priorities as Tisdale and may struggle more with managing their finances.

The biggest challenge, everyone said, was creating a budget and sticking to it.

“To create the budget, putting pen to paper is the easiest thing to do,” Mary Wilburn, a volunteer for the Volunteer Income Tax Assistance program said. “The big thing is taking a month and really starting to record everything and see where your money is going.”

She suggested using a spreadsheet or an app to keep track of weekly and monthly expenses.

Raymond Shaffer, an assistant professor in accounting and finance, said deciding the difference between needs and wants is crucial when creating a budget.

“Very few things we really need. Now an expensive cup of coffee, it’s a nice want, sure it’s great, but if you don’t have the money you don’t do it,” Shaffer said.

Knowing how much money you have to spend and what you actually need to spend it on is important, but Shaffer said it’s also important to put away some money.

“You should be trying to save some money, because there’s always going to be an emergency coming up,” Shaffer said. “If you spend exactly how much you have coming in, then at some point you’re gonna run into trouble.”

Christine Adams, Interim Head of Information Services at Maag Library, said you should save receipts and write down everything you spend money on.

“You don’t think much about it at the time, but if you look back at it you may see how much money you could be saving,” Adams said. “You may look at it and say ‘That’s like hundreds of dollars a year I’m spending on coffee.’ If you start writing down what you spend money on, you’ll be shocked.”

It’s not all about budgeting the bills, grocery shopping and putting away some money, though.

For example, she saw coffee cups from Dunkin’ Donuts and Starbucks at the VITA session. She said making coffee at home will eventually save you money. Coffee doesn’t always have to be home brew — it’s important to have a treat once in a while.

One mistake Wilburn noticed that students do is actively use credit cards, which leads to more debt and a bad credit score.

“Credit cards will get you in trouble. You miss one payment on it and your interest rates start going through the roof,” Wilburn said. “They think, ‘Oh I’ll just pay for it later’ and later comes all of a sudden they have a big bill and it’s hard to pay for that.”

“Be careful with using credit cards. Credit cards are okay if you pay them off every month, but if you can’t pay it off every month you shouldn’t be using it, especially as a student,” Shaffer said.

But he had a different take when it came to what the worst mistake students make is — he thinks it’s working too much.

“That comes from ‘Gee, I want the car, I want the shoes, I want the cell phone, I want this and I want that.’ That’s at the expense of doing well in their classes. If you’re not gonna do well in your classes and if you’re not gonna take them seriously just go work somewhere and drop out of college,” Schaffer said. “You can’t do both. You can’t work all those hours and come to school full time and expect to do well.”

Shaffer said one of the things students lose sight of the most is that the brevity of their time as a student.

“It may seem like forever, but you’re only there for a few years,” he said. “Then you’ve got the rest of your life to work and make that money and get some of the things you want as opposed to the needs that you have.”

Adams thought students who did things, such as buying fast food rather than cooking when they were tired, were making the mistake of doing things out of convenience.

“It’s not really thinking ahead. I did it myself and it’s just a natural human thing to do. You’re trying to focus on school, trying not to work too much because then it makes it hard to go to school,” Adams said.

She said it would benefit many students and there is also a rack full of financial advice and budget planning materials on the first floor of Maag Library for students who want to learn how to manage a budget.

As a general rule, if you can eat, drink or wear an item, it’s usually not a good use of credit.