“Out of Rushmore’s Shadow” by Lou Del Bianco tells the story of the unrecognized chief carver of the Mount Rushmore National Memorial. The performance took place at Youngstown State University in DeBartolo Hall on Oct. 19.

He learned that his grandfather, Luigi Del Bianco, held the position of chief sculptor and carver of Mount Rushmore. He then created a play in which he portrayed his grandfather.

The play gave a sense of the challenges Luigi Del Bianco faced and contributions he made to the national monument.

John Sarkissian, chair of the world languages and cultures department, said “Out of Rushmore’s Shadow” presented an opportunity to bring Lou Del Bianco to YSU.

“Here we have a contribution of an Italian-American to something that we consider quintessentially American,” Sarkissian said. “What’s more American than that?”

The play raises a broader question of who finds his or her way to history. Sarkissian said he thinks it might also stimulate people to think about other hidden facets of American history or any history.

“There are many people whose contributions have gone unnoticed,” he said. “It might broaden our perspectives.”

Lou Del Bianco’s performance combined a lecture and multimedia elements to create a one-man show, where Luigi Del Bianco came to life and spoke to the audience about his experience as chief carver.

Lou Del Bianco said the National Park Service denied the recognition from him even though he and his uncle uncovered primary source documents from the Library of Congress that discuss not only how important he was, but how vital he was to the work.

He said they also found primary source documents about the powers that were harassing him, bullying him and making his life miserable in an effort to make him quit.

Lou Del Bianco creates shows that combine the arts with education, and wants immigrant children to hear about his grandfather.

“I have found that he is a great source of inspiration to them because they’re looking at somebody who’s an immigrant and saying, ‘Look what I was able to do. Look what I went up against and how I was able to overcome all these obstacles,’” he said.

Lou Del Bianco said the play is a story about the love of a grandson for his grandfather. He wants people to leave the program eager to talk to their parents and grandparents about their history.

When he first put the performance together, he studied old photos and created scenarios about what his grandfather did in the photos. Lou Del Bianco said the show became a part of him.

James Mullarkey, a political science major at YSU, came to the event because he loves American history.

“I thought it was very informative. I enjoyed it. I learned some things I had never known before. It was very insightful,” he said.

Martha Pallante, associate dean and professor in the history department, came to the event because she thinks Italian and Italian-American contributions remain significant and overlooked.

“I thought it was very well done, very well researched. As an Italian-American, I find the whole narrative very interesting and understandable,” Pallante said.

“I thought it was really interesting and a great example of the kind of programming that the Center for Italian and Italian-American Studies could bring to the campus,” Fluker said. 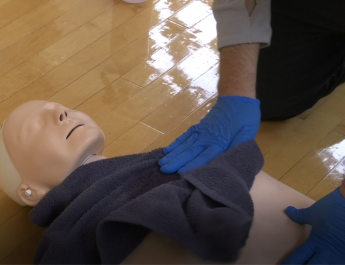 One thought on “The Man Behind Mount Rushmore”