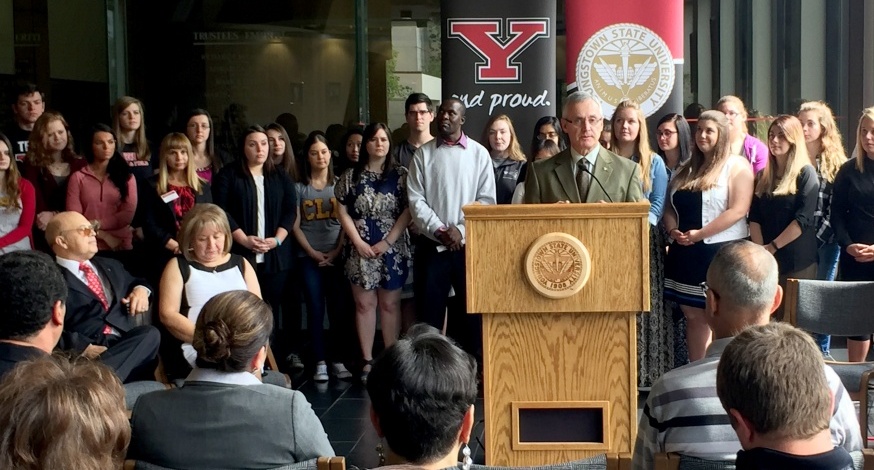 Their donation will create an endowment to increase campus employment opportunities for students, as well as funding a $100,000 scholarship the couple created in 2001 to benefit Hispanic students. 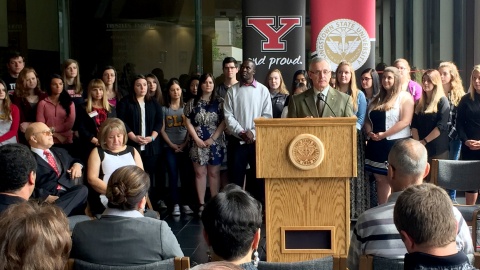 Flor “Shorty” Navarro immigrated to Youngstown from Puerto Rico in 1951 at the age of 14 with little to no finances. In 1982, “Shorty” opened his Lincoln Mercury dealership on Wick Avenue, which he later expanded to 11 franchises.

“Looking back on my life I never thought of anthing like this. I was just a kid who came from the island with hardly any clothes,” Flor Navarro said. “ To me I never thought I was going to give the university one million dollars one day. Are you kidding me? No way in hell.”

Flor Navarro said he hopes the money will help students obtain an education.

“The whole idea is about helping people. The most important thing is without an education you have no chance at all. If you have an education at least you have a chance to make it in life,” he said.

“For the young people you have to understand that nothing is easy in life. You have to work; you have to study. This country allows you to do that,” Elba said. “Thank almighty God for all the hard work we did that we can do this to the university.”

Tressel said the donation will impact many students.

“I think it was also a wonderful message … to remind us how fortunate we are to have this chance to work like crazy and follow the lead of people that have been difference makers in the community,” President Tressel said.

The Navarro’s contribution follows another $1 million gift to the university by Tressel’s in-laws, Frank and Norma Watson during the first week of May.

Their donation will support the construction of a student success center joining Jones Hall and the Maag Library. When Tressel announced the project, he estimated it would cost $9-10 million.

Tressel said the new student success center will be named after the Watsons in appreciation of their generosity.