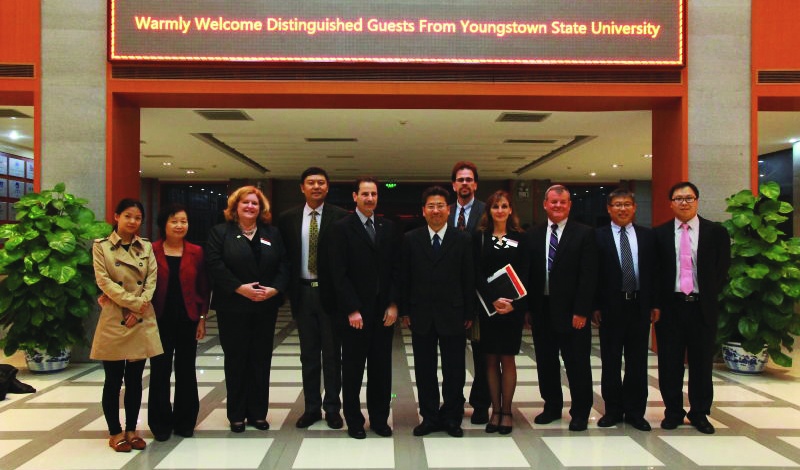 A delegation of administration and faculty members from Youngstown State University returned from a two-week trip to China earlier this month. Provost Martin Abraham said the trip was a successful first-step in the process of relationship building.

“We had very good meetings with several universities, we talked with several recruiting agencies, we met with some alumni, visited an incubator and we learned more about the Chinese culture,” Abraham said. “So this was a very good start to what I would expect will be a long-term initiative.”

Memorandums of understanding were signed with the China University of Petroleum Beijing, Chengdu Technological Base, the Communication University of Nanjing and the Union of Northern International Universities — a conglomerate of schools with an enrollment of 200,000 students. The pathway agreement was with Beijing Jiaotong University for graduate students who meet YSU’s English language and graduate admission requirements.

They also provided information to recruitment centers and gave contact cards to students interested in studying abroad at YSU.

At an educational expo in Chengdu, the delegates had a booth where they could engage with students and their families about studying at YSU.

Gardner said they made an effort to deliver information to parents and grandparents of prospective students.

They made a video that showcased the additive manufacturing equipment YSU has to show to people at the expo and the various universities. It showed the creation of 3-D printed models of Pete the Penguin and a panda that they gave to university leaders.

“Most people seemed to be quite impressed with the quality and capacity of the lab. Students were excited about the possibility of coming to YSU to participate in our program. We included the video as part of our display at the recruiting fair, during which we seemed to have one of the more active booths, so overall, it seemed like a very positive element of our efforts,” Abraham said.

A YSU alumni dinner was held in Shanghai. Trish Reader, a YSU alumna, and her husband attended. The couple moved to Shanghai a few years ago, where Reader works as a teacher. Her husband works for Delphi.

“It was very productive because we want to try and make contacts and see what we can work out,” Gardner said.

On their last day in Shanghai, the delegates met with Sudan University, which Gardner described as “the Harvard of China.” Mike Crist, interim dean of the College of Creative Arts and Communication, gave a recruitment presentation.

“We had discussions with them but this one was a little bit different. They were quite interested in Dean Crist and the College of Creative Arts and Communication, and journalism, and we began discussions,” Gardner said.

Abraham said the delegation will hold a follow up meeting so they can identify specific targets and assign responsibilities to each delegate. The next steps will be to develop relationships with partner organizations and recruiting agencies.

“This was an important first step. But there’s a lot of additional work that we need to do to get us to the level we hope to be at,” Abraham said. “We’re working to enhance our own operations back here in Youngstown, to make sure that students who do come over will be comfortable here. And we’re also looking to determine ways in which our students and faculty can travel to China, as part of a more robust study abroad effort. This needs to be a long-term investment in YSU’s future.”