A survey was conducted at Youngstown State University by the William F. Maag Jr. Library Committee to learn how they can improve student experience in the facility. 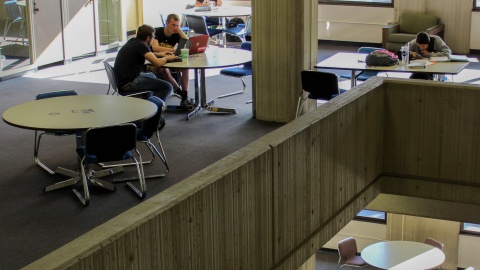 The committee, which was appointed by Provost Martin Abraham, sent the survey out to students and faculty during the spring semester. Ana Torres, the interim director of Maag Library, said the survey results will be used to make improvements.

“The committee worked very hard on putting forward a report to give us a vision for [where the library] should be within the next five years,” Torres said.

Students who answered the survey offered many suggestions to the committee. Christine Adams, a member of the committee, said one of the most popular suggestions was a change in library hours, particularly during finals week.

“There were a lot that said they wanted to stay and study all night,” Adams said.

The report stated that the need for later hours is a result of YSU having more students living on campus. The committee is looking into additional hours for some locations in the building, but Adams said the change is a budgetary issue.

Another necessity addressed through the survey was a need for more comfortable seating area. Adams said physical space will be the library’s first issue to address.

“We’re looking into what options we have to add furniture,” Adams said. “The quiet floors have big group tables all around them, so that’s not really conducive to silent study.  We’re going to try to find a way to get more individual study areas [on those floors].”

The committee plans to turn the first floor of the library into a more inviting space for students and a centralized information hub. They hope to incorporate more group gathering spaces, a staff meeting room and a public restroom to increase accessibility.

“They took out a bunch of old books in the reference room and replaced all of the extra shelves with two new couches,” Loedding said. “I can definitely say that more people are studying there now.”

“We would like for the library to be the space where everyone comes,” Torres said. “Whether they’re working individually or as teams, as many of the classes are gearing toward teamwork, we understand that the space is needed.”

Additional suggestions brought up from the survey include increased library instruction to students and updates to online databases.

The library’s online databases were compared to the databases at similar-sized institutions. The study showed that Maag lacked in STEM and eBook databases, something that the committee plans to improve.

Vacancies in library staff has created a challenge over the past few years, and the committee sees it a priority to fill these vacancies. Torres said the library has been without an executive director since June 2011, and Provost Abraham plans to fill the position by July.

Adams said the survey was a useful first step in bridging the gap between what the library offers and what the students need from them.

“It’s always good for the students to let the administration know what they want,” Adams said. “That survey helped us see what the students are looking for.”