Maag Library is searching for a new executive director, which the building has been without for almost seven years.

A search in fall 2017 for a new director eventually failed, according to Youngstown State University Provost Martin Abraham.

“We interviewed four candidates, after which we decided that only one of them had the qualifications we were seeking,” Abraham said. “We offered the position to the preferred candidate, but he turned us down.”

Abraham said he cannot speak for the time prior because he has been the provost at YSU for three years, but since that time he has been moving in the direction of hiring a permanent executive director.

“I spent a little time to understand what it was that they needed. We investigated alternatives, such as developing a collaborative partnership, which we decided would not be in our best interest,” he said. 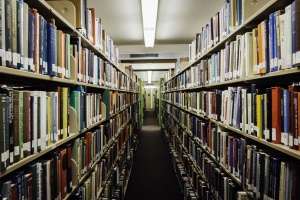 Abraham said he established a team two years ago to develop a strategy for the library.

He said a revised search committee has been convened and a new job posting should be available this week. Abraham said he is hopeful to find an executive director.

“We changed up the job description so that it should bring a broader range of candidates,” he said. “I’m going to work more closely with the library staff to try to spread the word more effectively.”

According to the job posting, Maag Library is looking for an executive director to grasp new perspectives and lead the library to opportunities for collaboration.

Cassie Nespor, a librarian at Maag, said when she started at YSU eight years ago, there was a director at Maag. The director was moved to a new department on campus and no one was hired to fill his position.

Nespor said the library was on an interim director basis for several years.

“When [the director] finally did leave campus, that interim person stayed and they kept the interim status going,” Nespor said. “We haven’t had a director in a long time.”

Nespor said during that time the university archivist was let go and not replaced.

“I do specific work. I’m reading. I’m going to conferences as much as I can and I’m kind of missing that mentorship that people in those positions would’ve given me,” Nespor said.

She said she might not have taken the job as a librarian if she knew that this was the situation.

Torres said it has been an honor to serve in this capacity.

“I was determined to work diligently to ensure that our beloved library kept running as smoothly as possible during the transition period, while leading it with my utmost dedication,” Torres said.

She said she has remained positive through these open vacancies and challenges.

“Our organization has been able to maintain its operations and move our services forward to align them with current student needs and trends,” Torres said.

She said since her responsibilities have evolved her appointment as interim director.

“They include personnel, operational and fiscal administration, in addition to the management of the various departments within the library,” Torres said.

Torres said she looks forward to having a permanent executive director soon and assisting the new hire in the strategic vision for the library.