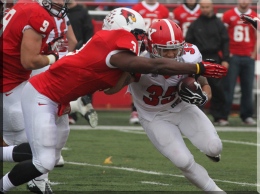 While he knows the Penguins — with a 4-2 record — are still in a good position in the standings, Hess admitted something else: “We’re probably the most miserable 4-2 team out there.”

After jumping out to a 28-7 lead against the Redbirds, YSU squandered its hot start, allowing ISU to score 28 points in what eventually led to a 35-28 loss.

“We really need to respond to these two losses that have been against two very good teams,” Hess said. “They’ve been sound and disciplined, and we need to realize that we need to get better.”

The night after the ISU loss, head football coach Eric Wolford said he responded with a lot of stress and little sleep. But the next day, he responded in a different way.

“The next day, you got to pick yourself up because you got to pick your team up,” Wolford said. “I told our ball team on Monday, ‘Hey, what’s reality?’ Reality is we’re 4-2. Is that ideally what we want to be? No. Should we be better than 4-2? Yes. But reality is that’s what we are.”

“I’ve made it a point to our coaching staff to understand that this is a big game,” Wolford said. “They’re 3-1 in the conference; we’re 1-2. I feel like this game could have playoff implications as far as the way the pecking order shakes out at the end of the year.”

YSU is tied for sixth place in the MVFC standings. However, other than South Dakota State University (3-0), every team in the conference has at least one loss.

Mark Pratt, center, said he expects the Penguins to play motivated football come 4:05 p.m. Saturday at Stambaugh Stadium, due to the team’s objective to climb the conference’s rankings ladder.

“I think it’s [going to] push us to strive harder and come out with our hair on fire on Saturday,” Pratt said. “We [need to] prove we can get back on that winning track.” Hess said playing on familiar turf should help.

“Being in front of our home crowd and being in our normal routine is something we’ve gotten used to,” he said. “It’s [going to] help us to get back here and play in front of our fans — people who enjoy watching us.”

The fans can also look for a few personnel changes made by the coaching staff. Jamarious Boatwright will be inserted at cornerback. The starting defensive line is subject to change as the week progresses, and there will be more of a rotation at running back.

“We made some subtle changes on some things,” Wolford said. “We expect to go out and play faster and more assignment sound.”