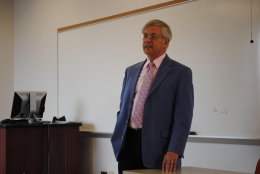 Gary Salvner, English department chairman, teaches one of his final classes in DeBartolo Hall before his upcoming retirement. Photo by Chad Travers/The Jambar.

When Gary Salvner came to Youngstown to teach, a gallon of gasoline cost about 60 cents and the Apple II computer had just been introduced. The Voyager I and II spacecraft were recently launched, and American moviegoers were lining up around the block to see George Lucas’ groundbreaking “Star Wars Episode IV: A New Hope.”

Thirty-five years ago, Salvner earned his doctorate from the University of Michigan in English and education. He had never spent time in Youngstown but had vague memories of the city from driving through on family road trips.

“I still have a picture in my childhood photo album of the Youngstown steel mills that you could see from the highway with smoke belching out of them. That was my entire impression of Youngstown,” Salvner said.

A native of Saginaw, Mich., Salvner taught in the Detroit and St. Louis city schools before he applied for a teaching position at YSU as a joint English and education professor.

Sept. 19, 1977, two days after Salvner began his first college teaching job, an event that came to be known as “Black Monday” changed the face of the city of Youngstown forever. The closure of Youngstown Sheet and Tube’s Campbell plant and the laying off of more than 5,000 workers devastated the local economy and signaled the death of the Youngstown steel industry.

“It was quite a cataclysm. It looked like the whole city was going to fall apart. Everyone was really in an uproar,” Salvner said.

Salvner said he stayed through the economic downturn because he enjoyed seeing students succeed and helping them work toward their potential.

“The reason this became such an interesting place for me is because I love our students. I love what they do, and I love their very grounded sense of a need for education and an opportunity to advance themselves,” Salvner said.

The late Gratia Murphy, a longtime member of the English faculty, was a mentor and a close friend whom Salvner treasured working with in his early days at YSU.

“Gratia’s name was so close to the word ‘grace.’ It was very fitting because she was the most gracious person I’ve ever known. She’s one of the people I miss the most,” Salvner said.

In his second year at YSU, Salvner was instrumental in creating the YSU English Festival, a tradition he has continued for 34 years. He served on the original committee that planned the event.

“The English Festival is one of the most satisfying things I’ve done in my years here. It’s a lot of really hard work, but it is so gratifying to watch students learn to value literature. It’s been a joy of my life,” Salvner said.

Salvner held a joint appointment in the departments of English and education and taught classes in both fields until 1998 when he was nominated as chairman of the English department, a position he has held for the past 14 years.

“One of the biggest disappointments about being the chair of a department is that I don’t get to spend as much time teaching as I used to. I love the magic of starting a new class. No matter how many years you’ve done it, it’s always exciting to interact with students and see how they respond,” Salvner said.

Deborah Lowry, part-time English instructor, began taking undergraduate classes at YSU in 1994. Salvner was one of her English professors as a student. He’s now her department chairman.

“I’m eternally grateful to Dr. Salvner as a teacher, as a mentor and as a leader. He’s touched my life in so many ways. It’s so sad to see him go, but his retirement is well earned,” Lowry said.

Sherry Linkon, a professor of English, said Salvner has done a terrific job during his time as chairman of the department.

“He has been a fair and gentle leader. The department will miss him,” Linkon said. Salvner said he plans to stay in Youngstown after his retirement. He will continue to teach a reduced course load at YSU and remain involved with the annual English Festival, but he also hopes to find time to write and is excited to be able to spend more time with his grandchildren.

Salvner’s wife, a middle school guidance counselor, is also retiring at the end of the school year. Salvner said he is looking forward to having the time and opportunity to travel with her.

“There are places in Europe we haven’t been for many years and places in Africa we’ve always wanted to see. We really want to explore other cultures and traditions.

Our daughter-in-law is from Estonia, and they have a beautiful culture. We can’t wait to spend more time there,” Salvner said.

Salvner said he will miss interacting with the friends and colleagues he’s gotten to know over his 35 busy years and that he would not trade his experiences at YSU for any price.

Still, he feels that retirement is calling to him.