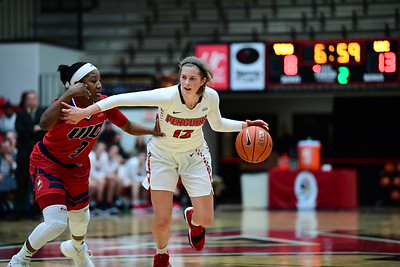 The Youngstown State University women’s basketball ended its six-game homestand with a 4-2 record. Now, it has to test its strength on the road with four tough road games coming up.

“I thought we learned a lot about ourselves. We learned where we need to improve and what some of our strengths are,” YSU head coach John Barnes said. “Winning four out of our last six is really solid for this group.”

YSU (6-9, 2-2 Horizon League) now has to prove that it belongs in the upper echelon of the league with games against Cleveland State, Wisconsin-Milwaukee, Wright State and No. 25-ranked Wisconsin-Green Bay. All will be tough tests for this team.

A continuing missing piece for the Penguins has been sharpshooting guard Alison Smolinski. She has been sidelined for the past few weeks with a fractured right foot.

“It’s going to be a while before she is back. She has a fracture/break so I don’t know when she will be back. Each injury and break has its own timetable for recovery. We are hoping as soon as possible,” Barnes said.

Barnes said he anticipates Smolinski returning this year, but just no timetable has been set.

Despite that, YSU has played well without her, and now have some tough tests ahead.

The Penguins start the road trip in Green Bay against the Phoenix. Green Bay (12-2, 2-1) is ranked 25th in the country. YSU has lost seven consecutive games to the Phoenix.

“We try and take every opponent the same but they know that Green Bay is going to be good and has won many championships,” Barnes said. “We feel like everyone is beating. Northern Kentucky won three games before beating Green Bay. This is the toughest stretch of the year by far.”

Freshman Guard Chelsea Olson has started four games, and played in 15 while averaging 5.3 points per game, 2.7 rebounds and one assists while shooting 39 percent and 38 percent from three.

“I’m feeling more comfortable and confident. It’s all a learning experience especially for us freshman,” Olson said. “Each game we learn something new and we get more comfortable each day. I think we are doing well.”

Olson also gets to play in front of her family for the first time as a collegiate athlete as she is from Wisconsin.

“IUPUI is making a case as the best team in the conference. They haven’t played Green Bay yet or Wright State. They are the only undefeated team (in conference) and they’ve done it on the road. That game was good for us because we had a lot of chances to win that game,” Barnes said.

YSU lost to Indiana University-Purdue University Indianapolis, 65-43. It trailed at halftime, 37-28, but didn’t shoot well in the second half.

“We missed a lot of layups and wide-open threes. They (IUPUI) also had a girl go for a career-high. That helped us evaluate where we are and know that we can do some things to get better,” Barnes said.

One thing that continues to be an issue is rebounding for the Penguins. YSU has been outrebounded on average of 3.6 per game. YSU has also struggled with second half defense as YSU 528-479 in that half.

“We just have to stick to our plan as much as we can. Things should turn our way if we do that,” Olson said. “Just helping us on the court has been key. Everyone talks on the court and they have been here before. We might not talk as much as we should.”

YSU faces Green Bay on Jan. 11, Milwaukee on Jan. 13 and then Wright State on Jan. 15 for three games in five days.