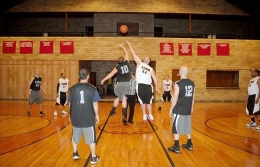 Players tip off at an LCAA basketball game inside the Steeples Center. Photo courtesy of http://lcaasports.info.

On a Saturday afternoon in Youngstown, Dave Stambul sits inside the Calvin Center gymnasium, nicknamed “the Steeples Center.” He records statistics as the Local Competitive Athletic Association’s spring basketball season unfolds in front of him.

Stambul, a Youngstown State University graduate, is the commissioner of LCAA Sports. His league promotes organized basketball to adults throughout northeast Ohio.

“If you asked me five years ago, I wouldn’t have come up with this,” Stambul said of his league, which offers spring, summer and fall basketball seasons.

Since its inception in 2000, LCAA Sports has progressed dramatically. Originally, the league consisted of eight New Castle, Pa., teams. After its expansion in 2001 with Beaver County and Mahoning County divisions, Stambul decided to center LCAA Sports in northeast Ohio.

“I realized there was a lot more basketball interest here,” Stambul said.

“It seems like everyone likes to come over here and play,” Wolfe said.

With 37 teams in the league, Stambul said he is proud of the LCAA’s progression. He said it is a result of many hours of hard work. “It’s a full-time job, putting in 90 hours or more a week,” Stambul said. “You’ve got to have a passion to do something, and with basketball, I have a passion.”

Stambul was a member of the YSU men’s basketball team from 1996 to 1999, though he rarely played.

“I knew my role,” he said. “I could have played at smaller schools, but I wanted to play Division I basketball and practice with better players.”

After graduating in 1999 with a bachelor’s degree in sports management, Stambul couldn’t give up basketball. So he established LCAA Sports.

“It’s a great league for sure,” said Dwight Holmes, a YSU basketball player from 2004 to 2008 and an LCAA player. “It’s very organized every year. We get referees here every game. Dave does a great job.”

Dom Carano, a YSU junior and LCAA player, added that LCAA Sports gives “people who like to play hoops a serious and organized league.”

The LCAA league is simple to join — just organize a team of at least five players and call Stambul at 330-774-5845. The individual fee is $5 per game, while the team splits the $20 cost for referees.

“With a team of five, the most you’re paying is $9 a game. If you have more players, the fee goes down,” Stambul said. “Moving [to the Steeples Center] allowed me to charge this way.”

After playing LCAA Sports in various gyms throughout northeast Ohio, Stambul opened the Steeples Center in February 2011. The gym has undergone drastic renovations. A refurbished court, along with new rims and glass backboards, are just a few of the court’s amenities.

“We were putting in 15 hours a day, but it has definitely paid off,” Stambul said. “The gym gives me a lot more freedom. Instead of trying to rent a gym and go on their time, I just block off weekend times for leagues and leave the weekdays open for rental.”

With the Steeples Center often booked until the early morning hours, Stambul said he thinks the league has a positive effect on the community.

“I’d like to believe I’m keeping people off the streets,” he said. “I think about that when I rent the gym to somebody at 1 a.m. If I didn’t, could that person have gotten shot doing something else?”

Along with a renovated gym, LCAA Sports boasts a website (http://lcaasports.info) that records numerous individual and team statistics. The league also maintains a Twitter account that provides game updates and addresses trade rumors.

“There’s all kinds of little things that we do extra that the guys eat up,” Stambul said. Stambul wants to expand LCAA Sports to other counties and develop a college basketball-style tournament. He added that the league will continue to participate in annual charity games.

“This is some of the best players in northeast Ohio, playing against each other,” Holmes said. “I would recommend the LCAA league to anybody.”