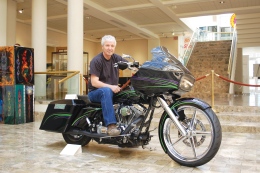 Steve Chaszeyka sits on one of his custom painted motorcycles, which will be on display at the Butler Institute of American Art through Sunday. Photo by Chad Travers/The Jambar.

Steve Chaszeyka, owner of Wizard Graphics, has been hand pinstriping and custom painting vehicles in his New Middletown shop for 40 years.

Chaszeyka has exhibited his custom painting at car and bike shows all over the country and has seen his work displayed in the pages of international publications.

He said he never imagined that an art museum would be interested in showing his work. He knew his talent qualified him, but he assumed that the self-described “lowbrow” nature of his chosen profession would prevent any acclaimed museums from showing his art.

“I never got the nerve. I’d do something that I knew was really good, but I’d end up talking myself out of showing it,” Chaszeyka said.

Louis Zona, executive director and chief curator at the Butler Institute of American Art, cut through the class and acceptability questions and immediately accepted Chaszeyka’s work as a valid form of American art.

After getting to know Chaszeyka at a book signing, Zona said he began to learn about Chaszeyka’s special brand of art.

“No one can paint flames like Steve can. That’s his calling card and his specialty. The depth and realism is just amazing,” Zona said. “His steady hands are impressive, and his patience is incredible.”

Zona approached Chaszeyka last year and asked him whether he wanted to display his work at the Butler. Chaszeyka said he was astonished, but jumped at the chance to show his work in an artistic setting.

“It’s not highbrow art. It’s sort of a subculture,” Chaszeyka said. “It’s a lot like tattoo artists. If I wasn’t doing this, I’d probably be painting graffiti under bridges.”

The two-week exhibition, titled “Moto-Graphics: Art of the Motorcycle/Hot Rod Generation Since the 1950s,” runs through Sunday and showcases Chaszeyka’s work. Admission is free.

The show includes six privately owned motorcycles that Chaszeyka has airbrushed for customers and several that he painted specifically with the Butler exhibition in mind.

The display also includes motorcycle gas tanks that Chaszeyka pinstriped, as well as metal cabinets he builds and paints as a hobby. Some of these cabinets resemble art deco refrigerators from the 1940s — complete with wild flames and tribal designs.

“I just started doing them over the winter when I didn’t have much work and I was looking for something to do. I just use them in the shop to store things in. If I have anything in my shop, it’s got to look cool,” Chaszeyka said.

Chaszeyka said he customizes the cabinets by modifying the sheet metal for a more “retro” look and then airbrushes the designs freehand. The cabinets are not for sale, but several of them are displayed at local motorcycle shops, like Harley-Davidson Bike Town in Youngstown.

Zona and Chaszeyka said they encourage people in the area who own motorcycles or hot rods that have been painted by Chaszeyka to bring them to the museum for the opening ceremony.

Chaszeyka is a modest artist who accepts recognition with a humble demeanor.

“While everyone was singing his praises at the opening ceremony, he was praising other artists. He’s a very gracious and humble man, and, once you’ve met him, you’ve made a friend for life,” Zona said.

Chaszeyka, a self-taught artist, said he was drawn to the hot rod and custom car culture when he was a kid in the 1950s. His father and uncle were “car guys,” and the custom paint schemes of their vehicles left an impression.

“I remember a huge crudely painted bat hanging from the headliner of my uncle’s hot rod Chrysler station wagon. It used to terrify my brother and me. When we rode in the car, neither of us wanted to look up at it because it was so scary,” Chaszeyka said.

When Chaszeyka saw Peter Fonda and Dennis Hopper in the seminal 1960s movie “Easy Rider,” he said he finally connected motorcycles with art.

“When I saw the way those bikes were painted, it just clicked. I never knew you could do that. I never intended to paint motorcycles, but the movie really resonated with me,” Chaszeyka said.

As he grew older, he discovered his talent for painting and pinstriping and began to refine his craft. His first paid job was painting a chopper on the back of a denim jacket when he was 16.

Unlike traditional artists who can throw away a canvas and start again or paint over mistakes, Chaszeyka has essentially no margin for error when working on vehicles.

“You’re painting on a metal canvas and you have one person that’s your boss: the customer. Imagine a job where you get a paycheck every day. Every day your boss tells you how amazing you are and how great your work is. They come back for more; they tell their friends. Every day you get all these accolades,” Chaszeyka said.

“Why would I want to work anywhere else?”