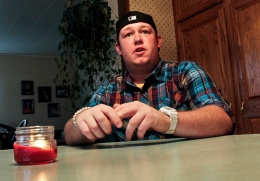 Junior art education major Andrew Wess sits at his grandfather’s home in Hubbard, where he has resided since his grandmother’s passing in 2009. Wess nearly lost his life in a car accident because of a seizure from epilepsy in his senior year of high school. Photo by Nick Young/The Jambar.

Andrew Wess was running late for a bowling tournament during his senior year of high school. After losing consciousness, he woke up with a tree in the passenger seat and to emergency personnel pulling him from his wrecked vehicle.

Andrew Wess, who had suffered the worst of 40 epileptic seizures in his life, was released from St. Elizabeth Health Center a half hour later. He triumphed at the bowling tournament, and despite his knowing that the next seizure is inevitable, the now 23-year-old Youngstown State University junior will not let the disease take over his life.

“I live my life like every other normal person would … with caution, but still like everyone else,” Andrew Wess said.

When Andrew Wess returned to Hubbard High School the week after the accident, his art teacher Josh MacMillan asked him if everything was OK and told him that he was in a similar accident.

“He [MacMillan] told me he got through his hard time with his art, and he helped me get through it with my art,” Andrew Wess said. “It’s like art therapy. That’s what I want to do for others.”

Andrew Wess has been an art education major at YSU ever since.

According to CUREepilepsy.org, epilepsy affects more than 3 million Americans of all ages.

“Almost 500 new cases of epilepsy are diagnosed every day in the United States,” according to the website. “Epilepsy affects 50,000,000 people worldwide.”

Andrew Wess was diagnosed with epilepsy at age 15 while he was at basketball practice.

“I was the first one at practice that morning and suddenly passed out,” he said. “Next thing I knew, I had no idea where I was — surrounded by people telling me to relax.”

Andrew Wess said a police officer that happened to be near the building came in and noticed his face was blue from lack of oxygen. The officer turned Andrew Wess on  his side.

Janet Mau, executive director of Mahoning Valley Epilepsy, said a seizure is caused by an electrical disturbance in the brain.

“You can’t catch epilepsy,” she said. “You either have it or you don’t. A basic seizure involves the stiffening of the joints and the shaking of muscles.”

Mau said there is also a loss of consciousness and body control. She said the correct first aid for these dramatic seizures is to turn the person on his side and tell him that everything will be OK until the seizure subsides.

“There are tons of misconceptions about these seizures,” Mau said. “You can’t swallow your tongue. It’s not physically possible.”

However, Mau did say that during these seizures, the tongue falls back and could potentially block airways.

Mau said about 47 different types of seizures exist, most of which are minor.

The other common types of epileptic seizures are absence seizures and complex partial seizures.

Mau and her co-workers hold support groups for adults and children at the Zion Lutheran Church in Youngstown and said everyone needs to be aware of these situations.

Andrew Wess said his seizures have taken a toll on his entire family.

His sister Amanda Wess said she has seen all but three of her brother’s seizures.

“I started to become numb to the feeling,” she said.

Amanda Wess said she feels that his seizure at home was worse for her to deal with than the one involving the car accident.

“He got stuck between his bed and the wall,” she said. “He was choking on his blood and banging his head off the wall.”

Though Amanda Wess has seen it all, it has initiated a close bond between her and her brother.

“There is a five-year age difference, but we hang out all the time,” she said. “People think we’re twins.”

Amanda Wess recently turned 18, but she said that she was somewhat forced to grow up because of her brother’s epilepsy.

“I didn’t want my parents to have to worry about me,” she said. “So I did the right things and got good grades so that they could focus more on my brother.”

“It’s scary because you don’t know where or when it could happen,” Ali Wess said. “I wouldn’t wish that on anybody.”

Ali Wess said no one would really give her son a break.

“People didn’t want to be around him because they were afraid something would happen,” she said.

Mau said this disability often causes a stigma and that not everyone is accepted after they announce they have epilepsy.

Andrew Wess has been living with his grandfather since his grandmother’s passing in 2009. He said they check to make sure each other’s medication is taken.

Mau added that just one missed dosage could put an epileptic person into a seizure.

Andrew Wess continues to work for General Motors, where his grandfather use to work.

He spends his spare time either with his sister or painting when he’s alone. He said he hasn’t had a seizure in two years.

“My grandma always told me to never let my sickness, disability, or whatever you want to call it, run my life,” he said.