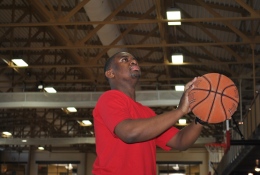 Senior intern Dennis Pixley is in his fifth and final semester with the Office of Campus Recreation and Student Programming, but he isn’t done just yet.

Pixley wants to leave his mark within the Andrews Student Recreation and Wellness Center.

Straight out of Rayen High School, Pixley went to Youngstown State University not knowing what to expect. He almost transferred to another school because he felt so alone.

Mike Beverly, senior coordinator for multicultural student services, told intramural sports coordinator Joe Conroy before the 2007 fall semester to take a look at Pixley because of Pixley’s enthusiasm and passion for sports.

Beverly has known Pixley since the summer of 2006, when Pixley applied for the Summer Bridge Program, which helps students transfer from high school to college with computer programs and workshops.

The Rec Center calls every summer and asks Beverly for potential interns, which is how Pixley got the position.

“He was a great kid from the start,” Beverly said. “I think what I see most is his hunger.”

Conroy said he will miss Pixley when he graduates and that Pixley has been his “lifeblood of sports” in the last five years.

“His knowledge has grown immensely the last five years,” Conroy said. “He is my go-to guy when it comes to simplicity, which is all of our online signups.”

After his freshman year, Pixley began his first year as an intern in fall 2007, still contemplating the possibility of transferring.

“When I first started the job, I didn’t know if I would stay,” Pixley said. “It ended up being a great decision.”

Pixley fell in love with the competitive nature of intramural sports. He helps as a referee and competes in football and basketball.

Pixley also played basketball and ran track as a freshman in high school. He played football the next three years, beginning as a quarterback and ending as a wide receiver.

Pixley compares himself to Philadelphia Eagles wide receiver Jeremy Maclin — while somebody else is the speedy DeSean Jackson.

“I think, for the most part, I was a possession receiver,” Pixley said. “I can run decent routes, and I could catch. I wasn’t the big-play guy.”

Pixley began making his mark in fall 2008 when he noticed many tournaments involving video games and wanted to incorporate that into YSU.

Pixley brought in his own Xbox one day and began “Halo 3” and “Madden NFL 08” tournaments.

Halo tournaments quickly died, but the Madden tournaments remained. In the fall, 30 students competed. The video game featured this spring is “NBA 2K12.”

“The one thing I helped bring in was video gaming because we didn’t have it at all when I came here,” Pixley said. “I hope, after I leave, it’s still here.”

The tournaments began with one Xbox. They’ve since evolved, with Game Stop and ROTC donating 16 consoles.

Another proud moment for Pixley was when he introduced extramural sports, which involves intramural teams traveling to places such as Columbus and Dayton to compete in regional tournaments.

Before Pixley graduates, he is attempting to include one new feature: Intramural Player of the Week.

“It’s all about the students, and they should be rewarded for their great efforts in intramural sports because it’s so much fun,” Pixley said.

Once shy and nervous, Pixley transformed into a boss who treats everybody the same, said senior Courtney Rothbauer.

“He cares about intramurals,” Rothbauer said. “Not only is he a hard worker, but he brings his humor. I not only see him as a boss, but as a friend as well.”

Rothbauer is in her second year at YSU, after spending the first two at the University of Mount Union.

One person Pixley helped is sophomore Jocques Spragling. Pixley got Spragling a job at the Rec Center.

“He’s a good friend, always shows up on time, always smiling [and] down to earth,” Spragling said.

Pixley is a finance major and sociology minor. He said he would like to be a banker one day or do something he enjoys.

“At this point with the job market, I just want a job,” he said. “Point me somewhere where I won’t be bored.”