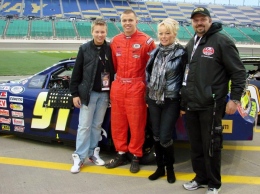 Robert Bujdoso, a freshman at Youngstown State University, has a serious need for speed.

“I’ve been doing this since I was 8 years old,” he said. “Racing has been my passion for about 11 years.”

The ARCA is a minor league for NASCAR. On average, ARCA speeds are about 10 mph slower than NASCAR speeds.

“I was a little nervous going into the race because I wanted to do well. But since this is my third race, it’s been getting a lot easier,” Robert Bujdoso said.

Opposing drivers give him extra motivation to succeed, but he said that his main inspiration will always be his father.

In 1990, Robert Bujdoso’s parents came to the U.S. from Romania. His father, Csaba Bujdoso, raced in the Sports Car Club of America for some time, and his two sons immediately took an interest in the hobby.

Csaba Bujdoso said his son might be better at racing than he was.

“He’s been improving a lot, and he’s doing his best against some really good competition,” he said.

When Robert Bujdoso isn’t practicing his skills on the racetrack, he’s spending the rest of his time studying as a marketing major at YSU.

“I leave for the track Thursday through Sunday,” he said. “So, there isn’t too much downtime, then I’m right back to school.”

Robert Bujdoso said it’s a challenge to balance his classwork and racing, but that he’s determined.

“The work is totally worth it,” he said. “This is something I really love to do. I love going fast, and I’m trying to make a career of racing.”

“There was one year where I actually competed in 25 total kart races,” he said.

Robert Bujdoso said his main goal is to turn racing into a profession and gain more sponsors.

“When he gets up front and wins more, he’ll get more exposure,” Csaba Bujdoso said. “It’s like moving up in any other profession.”

He said racing is dangerous, adding that he’s often concerned with his son’s safety.

“They’ve crashed before, and it’s dangerous, but I’m confident in the safety equipment that the facilities provide,” Csaba Bujdoso said.

Robert Bujdoso said his car avoided two close calls on Friday. A tire flew into an opposing driver’s windshield, and another car went airborne very close to him. However, his car, nicknamed “The Hulk” because of its green and blue color scheme, managed to avoid any type of crash.

“It’s got this blurple kind of color,” Robert Bujdoso said. “We called it ‘The Hulk’ once, and the name just stuck.”

His car is a Ford that sports the number 91 on its side. Ricky Rudd once drove the car in the NASCAR Sprint Cup.

Robert Bujdoso and “The Hulk” will rest until their next race in February at the Daytona International Speedway.