Keith Lepak, associate professor in the department of political science and international relations at Youngstown State University, was nominated to give his hypothetical last lecture at the Student Government Association’s Last Lecture Series on March 29.

Through the series, one professor is nominated each semester to answer the question, “If you could give one final lecture, what would you tell your students?”

Lepak took this opportunity to lecture on the conditions for hope in the future and said he dedicated it to his wife and married couples.

“No one can tell you exactly what the future is going to bring, but it does beg the question generally over all of time,” he said.

Lepak discussed the human race as a whole and the overarching concept of beauty. Overall, he attempted to get the audience to think about the current situations in the world today.

Moataz Abdelrasoul, a sophomore pre-law major and parliamentarian in SGA, said the association was grateful to honor Lepak at the event.

“Dr. Lepak is one of the most student-oriented professors at Youngstown State and has positively impacted the educational experience of countless individuals. He continuously goes above and beyond the call of duty to serve students,” he said. 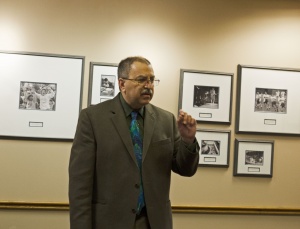 “The empowering words he offered are undoubtedly an extension of who he is as a person,” he said.

“I’ve never had him in class so it was really great to learn about him and hear his words as if this were his last lecture at YSU,” she said.