Meshel Hall on Youngstown State University’s campus may sound familiar to some. Harry Meshel, for whom it was named, recently passed away leaving his legacy for the university and those who knew him. 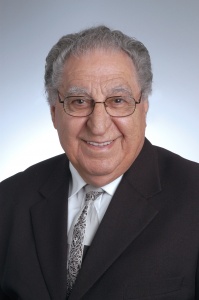 Meshel passed away at age 93 on Sept. 4. He was an accomplished politician and Youngstown advocate.

A Youngstown native and graduate of Youngstown College and Columbia University, Meshel served in World War II, was elected into the 33rd District of the Ohio Senate in 1971 and served as chairman for the Ohio Democratic Party.

In addition, he was the majority whip in the Senate for two years, the chairman of the Senate Finance Committee and in 1976, became the assistant president pro-tempore.

Throughout his 22 years in the Senate, Meshel continued to advocate for Youngstown and helped to obtain 150 million dollars for improvements at YSU.

In 1986, Meshel Hall, YSU’s new technology building, was named after him because of his contributions to the university.

Meshel was named a YSU trustee in 2007 by Ohio Governor Ted Strickland and served a nine-year term.

An avid boxing supporter, he helped to create the Ohio Boxing Commission, which is known today as the Ohio Athletic Commission.

Mike Romeo, who was part of Team Pavlik, travelled with Kelly Pavlik, a professional boxer, to all of his boxing matches, and Romeo and Meshel became close.

Romeo recalled going to an early breakfast with Meshel and others after one of Pavlik’s fights. Meshel was enjoying the morning, and they jokingly asked him if it was past his bedtime.

Although Meshel laughed this off, he later explained to Romeo that there is nothing better than Youngstown coming out to support the boxing community.

“Why would I ever want to sleep for all of this? This is something that I’m going to remember for the rest of my life. I’ll sleep when this is over,” Romeo recalled Meshel saying.

“His passion for boxing and what was best for Mahoning County and Youngstown, just is unbelievable. Everything he did – it wasn’t ‘let’s better Harry Meshel.’ It was ‘let’s better the students, Youngstown and the fighting world,’” Romeo said.

Jim Tressel, president of YSU, said the passing of Meshel is a reminder of how blessed the community is to have had such an impactful person in Youngstown.

“It’s a reminder that we’re constantly losing members of the greatest generation who came up with humble beginnings, served in the military and spent their entire professional lives serving the community,” Tressel said. “There’s not a prouder penguin than Harry Meshel.”

“Every time I spoke with Harry, I learned something. No one understood the voters better,” he said.

Graig Graziosi, a YSU graduate, built a relationship with Meshel while he covered stories at The Jambar.

“He was definitely one of the most influential and hardworking people that you would find in the city. Somebody who believed what was going on in the city and saw value in what was happening,” Graziosi said.

Graziosi said he believes that people should take two ideas away from Meshel: “There should never be any shame from where you’re from. Second, there is so much excitement that you can cram into a life.”

One thought on “The Legacy of Harry Meshel”