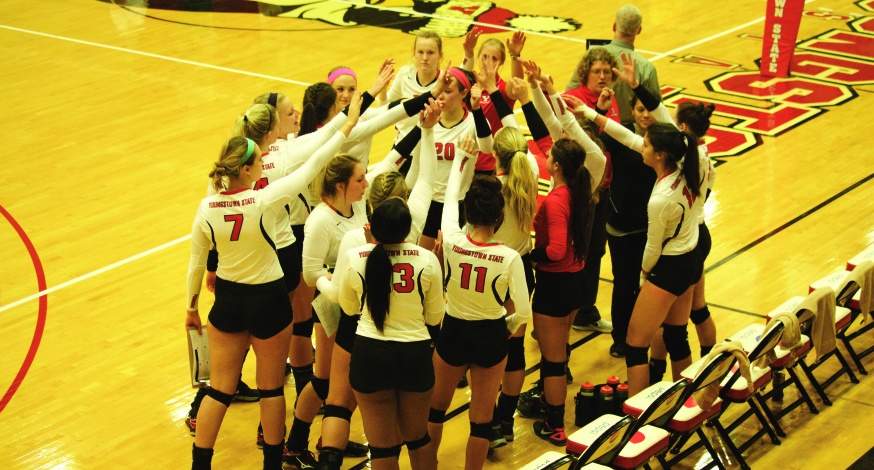 Collegiate athletes dedicate their entire lives to fulfilling a dream to play at the highest level and perfecting the sport that they grew up loving. They spend years at practice, camps and tournaments in an attempt to constantly try bettering themselves.

But in the back of every athlete’s mind rests the thought of his or her career coming to an end. That sport that once set you apart from everyone else and the pastime that consumed your youth is now just free time. No more film study, no more practice and no more games.

This reality set in for Youngstown State University setter and defensive specialist, Jessie Gerig, on Nov. 10 after the YSU volleyball team lost their final home game to the Wright State University.

Although this wasn’t the last game of her career, this was the final game at YSU. And something as simple as the untimely question, “Since this is your last home game, what will you remember when you think about playing at YSU?” invoked tears and an awkward moment where reporters didn’t know how to properly react.

After several days, the emotions of the Wright State game and the season finale against the University of Illinois at Chicago subsided, and Gerig was finally able to answer the question.

“I will remember the team bond and all the individuals. And how I was able to bond with every teammate,” Gerig said. “Honestly, there’s not one girl I would switch out from previous teams. I loved every single person. Not just play on the court with them was great, but all the other things that come along with college athletics — being on the bus and going out to eat. There wasn’t one moment where we didn’t have fun. It’s all the other moments besides playing volleyball.”

Those “individuals” that Gerig talked about helped turn around the YSU volleyball program over the past  three seasons. After the 2011 season, which saw the Penguins finish 5-29, YSU hired Mark Hardaway as the head coach and brought in his first recruiting class.

Hardaway brought in Aly Ryan, Nikki Thompson and Lauren Thompson as his first recruits before the 2012 season. Gerig later joined after she transferred to YSU in 2013.

The YSU volleyball team has a connection that is unlike any other sport on campus. The players frequently talk about a “family” atmosphere. Nikki Thompson, defensive specialist, said the players helped make the team an accepting environment.

“We’re all alike, we’re friends on and off the court,” Thompson said. “We still see players that have graduated, they still come to our games and we still hang out with them. It’s been like that since my freshman year as well. We’ve always been close to each other, and if there’s one person who’s singled out, then we try to get in contact with them. I feel like that’s how we learned to succeed. We gel off and on the court.”

Gerig said even though the volleyball team finished 10-21 this season, it’s that connection amongst the team that made the season worthwhile. Thompson and Gerig both expect the returning members of this year’s team to learn from this season and play better next fall.

“The overall experience of the team does make up for it. If I was on a team that lost, and I didn’t like the players, that would have been a bad situation, but because we had a stronger connection, and we’ll know that we’ll always have that connection, it’s okay that we didn’t come out on top,” Gerig said. “It’s still disheartening for me that in the past two years we took two steps forward, and this year we took one step back. You’ll have to fail in order to succeed even more.

Thompson will leave YSU as one of the top players in program history. She broke the digs record twice during her junior and senior seasons, but when she looks back on her career, she will remember how her fellow seniors were able to turn around YSU’s program and molded it into a contender for the Horizon League championship.

“The first thing I think of is how far we’ve come since our freshman year. Personally, with all the digs and the dig records and all the close friends that I’ve gotten since I’ve been here,” Thompson said. “How we’ve started from the beginning — where they’ve never made the tournament, and all of a sudden they’ve made it three years in a row. We get two players back-to-back that were Freshman of the Year [in the Horizon League], we get Setter of the Year [Val Jeffery] … it’s awesome that we were able to turn it around that quick.”

YSU head coach Mark Hardaway said the team kept working hard toward the end of the season. He said the team “didn’t have a losing feeling in the gym,” and he was glad the seniors won their final game at UIC.

“I think not only just the fact they won, but I think it was about how well we played. And to me, you work hard because you want to see it all come together in a match and it all came together really well for them in that final match,” Hardaway said. “I know the seniors didn’t want to go out the way they went out and so I think, for at least that one night, they went out the way they wanted to go out.”