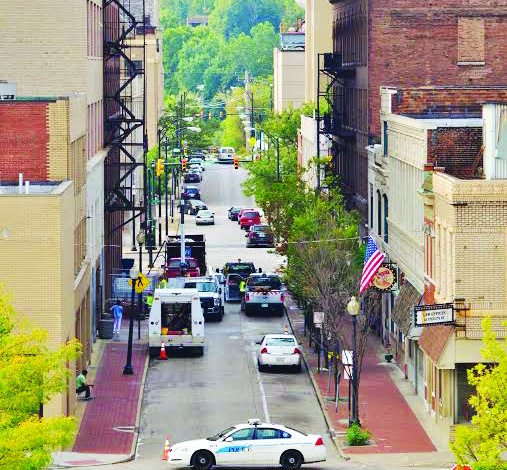 The students are architecture majors who are creating plans for theoretical buildings in Youngstown as part of KSU’s senior design studio. They are concentrating on development that will rejuvenate parts of downtown with a focus on sustainable design and using the buildings to better connect the existing infrastructure.

Hunter Morrison, executive director of the Northeast Ohio Sustainable Communities Consortium, told the students their designs could have significant impact on the city.

“This is not an academic exercise,” Morrison said. “You are writing the future of this city.”

Joseph Ferut, a KSU professor and one of the coordinators of the senior design studio, said this was one of the most important sentiments to come out of the meeting.

Dominic C. Marchionda, city-university planning coordinator for Youngstown State University’s Center for Urban and Regional Studies, hosted the event. He said he will work hard alongside local stakeholders to implement the best designs the students come up with.

“Ideas without action can’t create confidence, so we’re going to be focused on implementation and taking these ideas beyond just this studio,” Marchionda said.

The students’ designs will target the former Wean United site along the riverfront, and the sections of Phelps and Hazel Streets that connect YSU to downtown.

Marchionda said that focus will help improve the odds of successful implementation.

“We’re not gonna say, ‘We’re going to take this 30 acre site over in the east side or the west side or the north side, and we want to make it an incubator, or we want to make it an arts district,’” Marchionda said. “We’re intentionally focusing on an area where those assets are already prevalent, and we’re going to build on them and better connect them so this really can be an innovation district.”

These areas are also the focus of design contracts the city’s Board of Control recently approved with MKSK, a landscape architecture firm from Columbus. They will deliver the city plans for an amphitheater and riverfront park on the former Wean United site by Jan. 15.

Marchionda and CURS will work alongside MKSK as they plan development along Phelps and Hazel Streets, with the intent of creating stronger linkages between downtown and YSU — taking advantage of the new state law that allows cities to establish open container “eatertainment” districts. The date for the submission of those plans has not been determined.

Marchionda said the Kent State students will be involved in that process.

During the meeting, there was discussion of the esplanade Kent State completed in 2013 that connects the university to the downtown business district as a potential model for designs. Morrison encouraged students to take ideas from cities like Cleveland and Pittsburgh and adapt them for Youngstown.

There was talk of creating wider sidewalks, better lighting and more commercial and retail space — including the oft-requested grocery store — along Phelps and Hazel Streets to make walking downtown from YSU more appealing. The possibility of bike lanes was also discussed.

Marchionda noted that students at The Ohio State University frequently walk to the bars and restaurants along High Street — despite it being much further from OSU’s dorms than downtown is from housing at YSU — because the connections are better designed and developed.

Kent students asked questions about the lack of green space — or just somewhere for people to gather or relax outside — in Youngstown’s central business district. They also drew attention to the inaccessibility of the riverfront.

Paul Hazelet, a student who participated in the meeting, said the discussion was enlightening.

“I learned more about the actual needs of the city, more than any online research could do. It was important that there were a lot of different perspectives,” Hazelet said. “It just gave us an idea, like an insider scoop of what we can do to try to help the city with our ideas.”

Marchionda said the people who walk these spaces everyday often find themselves settling for what exists. He said he’s excited to see what students from outside the area are able to generate.

“Having 150 new eyes on a place that they’re not particularly familiar with, I think, is going to provide a lot of creativity,” Marchionda said.

The students will return to YSU to present their designs later in the semester.