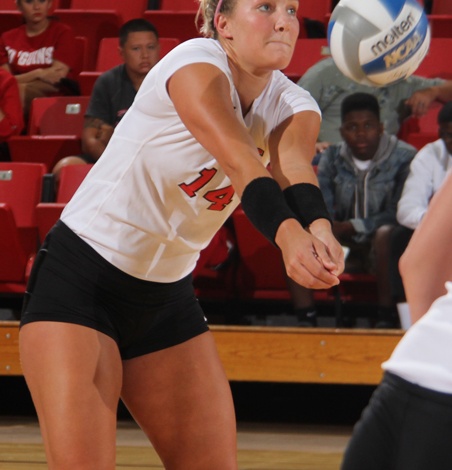 Before intermission began on Saturday at Beeghly Center, Youngstown State University head volleyball coach Mark Hardaway gave senior Missy Hundelt a game ball.
Hundelt had no idea why until Hardaway told her that she compiled her 1,000th career kill, the 11th player in YSU history to reach the milestone.
“I’ve played on a lot of teams; I’ve played with a lot of volleyball players; and I can say with complete confidence that this is the best volleyball player I’ve ever played with,” senior Erika West said. “Missy definitely deserves the high achievement. I was happy to be here when it happened.”
Hundelt, who collected 19 kills on Saturday against the University of Toledo, said the achievement means a lot, but she could not have done it without her teammates. Her 1,000th kill came on the 24th point in the second set.
“I think it takes a certain personality to know that you have to carry a big load, and she has that type of personality,” Hardaway said. “She’s not afraid to say ‘Hey, give me every ball,’ and she’s okay with that. I think that she’s a big part of our success the last two years.”
Despite Hundelt’s strong performance, the Penguins fell to the Rockets, 3-2, in the finale of the YSU Invitational.
“They played well in the fifth set, and we got kind of tentative — which is the thing we’re trying to get out of,” Hardaway said. “When things go wrong, you can’t go safe and soft. You still have to play aggressive and do the things that got you there.”
The Penguins also fell to Tulane University on Friday evening, 3-1, and defeated Saint Francis University, 3-1, earlier that day. The biggest factor was consistency, which YSU (3-3) did not do well. When the Penguins did win sets, they were streaky.
“That tends to kind of be our problem right now — is that we’re up and down,” Hundelt said. “Usually, when we win is because we go on a roll or a run. There’s no reason why we couldn’t win, so that’s something we’ll work on in practice and try to figure out how we can stay on a constant winning streak versus going up and down.”
One positive from the past weekend is that the Penguins faced tough opponents compared to the non-conference teams they faced last year. Hundelt and West said they feel the early season opponents will pay off when Horizon League play begins later this month.
Another positive aspect is the Penguins played at home. Friday and Saturday marked the first YSU Invitational since the 2010 campaign.
“It’s good for the players to be able to sleep in their own beds and playing in front of home fans,” Hardaway said. “If you take a poll of the players, I know that they’ll all probably disappointed.
“We really felt like we could’ve won this tournament, so to go 1-2 is really disappointing, but we just have to make sure that we keep the end goal in mind because the end goal is to win the conference tournament.”
The Penguins’ next game is on Thursday at the Illini Classic against Arizona State University. YSU will then wrap the weekend at the Billiken Classic against Bradley University on Friday along with matches against Saint Louis University and Miami University (Ohio) on Saturday.
“When we were off, it seemed like nothing was going our way,” West said. “At the end of the day, it comes down to our mistakes. Our error ratio was way too high, so when it comes down to it, we just need to get back in the gym and just keep working hard.”