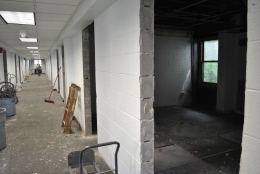 Phase two of renovations for Kilcawley House began in May. Photo by Chris Cotelesse/ The Jambar.

The second of three planned phases of renovations to Kilcawley House began on May 14 and is scheduled to be complete on Aug. 10.

This second stage of the renovations, which will completely remodel the dormitory’s second and third floors, will cost about $400,000. The entire project is estimated to cost approximately $1 million.

The ceilings will be raised approximately six inches. In addition, the second and third floors will boast new carpet, new paint and new light fixtures. The rooms’ fixed furniture will also be replaced.

“The building is 40 plus years old, and so it has not really had a lot of attention given to it. This is our way of doing something to that building, which modernizes it a little bit, brings in a new look, a new feel that it hasn’t had for a number of years,” said Harry Meyer, associate director of housing.

Kevin Linger, a junior telecommunications major, had noticed the declining conditions in Kilcawley House prior to the makeover.

“The rooms are small, and the furniture is old. The walls and carpet are dingy at best, and the elevator breaks almost regularly,” Linger said. “Living on the seventh floor was generally uncomfortable.”

The third and final phase of renovations will involve making the same changes to the sixth and seventh floors of the building. It is set to begin sometime next year.