Minerva Cordero, the associate dean of Academic Affairs at the University of Texas at Arlington, was the keynote speaker for the STEM career day on March 3 at Kilcawley Center. 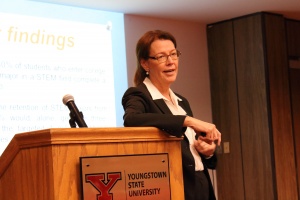 Cordero spoke about the importance of pursuing careers in the science, technology, engineering and mathematics field. She said there needs to be a national push for STEM jobs, the way there was during the space race in the mid-1900s.

One problem is retaining students in college in STEM programs — Cordero said less than 40 percent of students who enter STEM programs graduate with that degree.

“I want to look at this today as a tool for helping us address one serious problem that is facing our nation, and that is the declining number of students pursuing degrees in STEM,” she said.

Cordero, who is also a mathematics professor, claimed that math is the reason why many students steer away from STEM. Students in the U.S. rank lower in math than students from other countries, she said.

“When we look at the results of the National Assessment of Educational Progress, it shows that less than one-third of 8th graders show proficiency in math and science,” she said.

Cordero emphasized that over 70 percent of all jobs require mathematics, and math graduates earn more money than most professions.

“If our country is going to retain its position in the world in terms of technology and science, we need the people who are going to continue doing these things,” she said.

A national initiative has been made to recruit and train roughly 100,000 STEM teachers over the next decade, Cordero said, and there is a high demand for professionals in the field.

“Economic projections point to a need for nearly one million jobs in STEM,” she said.

After addressing the lack of people pursuing STEM degrees, Cordero turned the conversation to the low numbers of women and minorities in the STEM field.

Cordero said 25 percent of jobs in STEM go to women, but if more women and minorities go after STEM degrees, then the country can reach the goal of 1 million STEM jobs,

Monica Busser, a math student at Youngstown State University, said she was inspired to become a math student after attending a previous Women in STEM event at YSU. She said many women don’t see themselves in STEM fields but having role models in STEM can be encouraging.