Pendleton said the color of her skin has made it difficult to identify with her African-American heritage, since people would commonly mistake her for being white, Hispanic or Jewish. She said people would treat her as if she was from their group, so they would talk to her differently.

“I’ve gotten accused of being neglectful to so many different races,” Pendleton said.

She learned to use this to her advantage when trying to promote inclusion, such as leading the black students’ union while attending Harvard University, which had a predominately white faculty at the time.

William Blake, director of student inclusion and enrichment, introduced Pendleton at the lecture. He said she came to YSU for the first time as the Martin Luther King Day breakfast speaker in 2016. He said it piqued Pendleton’s interest when YSU President Jim Tressel ended his opening remarks by saying, “Go Penguins.”

Pendleton is currently finishing a book on the subject, “Finding Your Inner Penguin.” She said the book is about finding who you are not based on the color of your skin, but on your humanity.

“As I wrote it, I realized it was becoming more than just my journey,” Pendleton said. “I thought it would be easy when I had the epiphany, but it wasn’t because then I had to look at my own prejudice. I had to interview other people to see what they thought and then I begin to see the world entirely different.”

Blake said questions and input during the lecture are going to be used as material for the book.

Tiffany Anderson, director of Africana Studies and English professor at YSU, organized the events for Black History Month. Anderson said she was pleased to conclude the month with Pendleton’s lecture. 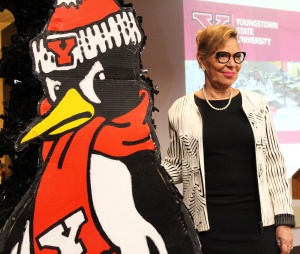 “We were really focused on dedicating this month to black student retention because it’s been a problem at our university,” Anderson said. “Here we have our keynote speaker who I think inspires [the students] to stay in our university system.”

According to an article published by The Jambar, the 2010 six-year cohort graduation rate for black students was nine percent. Pendleton said the statistics are against minorities, but students don’t need to be identified by this.

All of the black YSU alumni were asked to stand at the event, which was followed by applause. Anderson said she wanted to honor those who attended for their accomplishments.

“I wanted to make sure that all of our students saw that there are black people who have graduated from Youngstown State University who are doing wonderful things in our community and beyond. It exists, it happens and it will happen with you all too,” Anderson said.

Pendleton said retention issues come from poor preparation in middle schools and high schools. These issues also arise from a disconnection between groups on college campuses.

She said it is up to the students and student organizations themselves to increase inclusion of other groups. Pendleton also said one person can come along and change someone else’s perspective on race regardless of their title.

“You are college students. You are at the height of everything that you can do and the fact that this is a university that prizes diversity, even if the numbers are small, it doesn’t matter. One person can change a place,” Pendleton said.

She said young people need to plan events to discuss diversity and racial differences. She said a college campus is the safest place to have these discussions, so it is unacceptable to stay in your comfort zone.