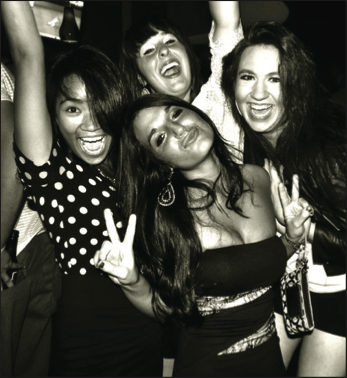 Friday nights on West Federal Plaza shine bright from the lights of the bars, clubs and new convenience store. The wind carries the smell of the streets and traces of eclectic tunes to the velvet ropes of Downtown 36.

Partygoers walk into the soft glow of colored lights and are greeted by the faces of the Champagne League, a group of college students set to turn parties into a business.

For hosting and promoting College Days’ Friday night parties at Downtown 36, the league gets half of the cover charge collected at the door. The league’s members reinvest part of their earnings into pro- motion, priding themselves on their work ethic and professionally made fliers. Jimmy Westerfield, a senior at Youngstown State University, said he always makes sure they are “classy.”

Westerfield, along with fellow YSU senior Michael Cylar and Noah Traylor from Kent State University, organized the first event at Club Entourage after making an agreement with manager Chip Banks. Since then, the group picked up JoAnne Tombo, another YSU senior, and set its sights on revamping downtown.

“Working with friends really helps. We all trust each other to pull our own weight. It’s a team effort,” Cylar said.

He said the Friday night crowd at Downtown 36 ranged from about 20 people to more than 300 on some nights. They stopped letting people in the doors at midnight during their last summer party on Aug. 26.

“The bar has gained a fresh, new group of people doing something not many other people in the area can pull off. We have awesome friends who are stylish, fun, diverse and loyal, and I think they are the ones we should thank for changing the Friday night scene,” Tombo said.

The group wants everyone at College Days to feel comfortable and have a good time. That means making an effort to be personable and foster a “classy” atmosphere.

“We wanted to create an environment where people could dress up. We wanted an upscale scene for a lower-scale environment,” Cylar said.

The young entrepreneurs do all of this in their spare time from pursuing degrees and working day jobs.

The men all work at the Southern Park Mall: Westerfield at Abercrombie & Fitch, Cylar and Traylor, who also blogs, at Finish Line.

Tombo, an art history major, works as the Ohio journalist for FrockOn, an online fashion magazine. She is also an official Miller Lite girl.

She is the Champagne League’s photographer. When she’s not snapping pictures, she is keeping all of the guys in line. As the only female of the group, she said the guys treat her like a princess.

“I like to call myself the head b—- in charge. Those guys are my brothers, and I always have their best interest,” Tombo said.

She attended the first Champagne League party on her birthday. After Traylor saw some of her promoting and photography work, he wanted her on board.

Cylar and Traylor got Westerfield involved after knocking on his door at the University Courtyard Apartments. They told him that they were “interested in taking over the summer.”

The group added a new edition to their entourage: DJ Richie Tisone. Already friends, the three men pulled him into the mix. Tisone began DJing about a year ago.

“It’s fun. It’s good to see a lot of familiar faces having a good time. Having friends around while I’m doing it is one of the biggest perks,” Tisone said.

The league members agreed they couldn’t do it alone. They said they owe their success to the people who come out and support them. Partygoers help promote the events by spreading word through Twitter and Facebook.

As they enjoy their success, they always have eyes on the future. They’re working on expanding their brand, which includes charity events. But even if career paths lead them in different directions, they’ll still have their friendship.

“I could see me hanging out with these guys in a bar 40 years later, and that’s all that matters,” Tombo said.