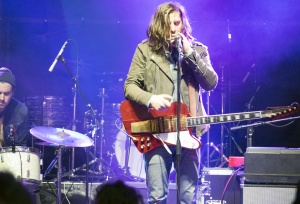 The main stage was titled the City of You Stage, where the headlining act Judah & The Lion performed at 9:30 p.m. Other acts on the main stage were Stone Senate, Jul Big Green and Welshly Arms.

Judah & The Lion met and formed in Tennessee. The band members consist of Judah Akers on guitar and lead vocal, Brian Macdonald on mandolin and vocals, Nate Zuercher on banjo and vocals and Spencer Cross on drums.

Akers said his favorite and most relatable song is “Insane” which relates the idea that everyone struggles and people are not alone.

“It is talking about the need to be ‘on point’ or always act kind of happy go lucky,” Akers said. “It in a lot of ways relates to people who are going through stuff, and it gives you a feeling that it’s OK to struggle and to feel insane, you’re not alone in it.”

The band had never been to Youngstown and was excited to explore the area and to perform their show. 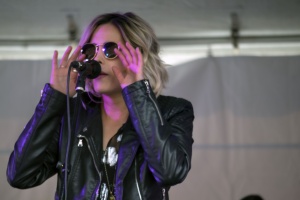 “We are just stoked to be here, we saw some videos from last year’s festival and thought it looked awesome,” Macdonald said. “So far we have had a little time to check out the town, but this is our first experience here.”

Onstage Judah & The Lion likes to play a high energy set and get their fans to participate in the show.

“We like to mix things up and surprise people on our sets. Our genre is not even defined,” Akers said. “We like rock and pop music and some of the songs we cover fall way outside of the folk genre, but ultimately we like to dance and have a good time.”

Now that Judah & The Lion has traveled and opened for Twenty One Pilots, their music has started to play on radio stations across the United States.

“One of the most interesting things I think for us is having songs on the radio now,” Zuercher said. “‘Take It All Back’ is becoming more mainstream, and people really like to sing the song when we are playing a set, and it allows us to feel connected to our audience.”

White Buffalo Woman is originally from Minerva, Ohio. The band started playing music in a basement at a funeral home. The band members consist of Evan Rutledge on vocals, Adam Murphy on guitar, Devin Bezeredi on Guitar, Alex Leggett on bass and Joe Wales on drums.

“Our drummer’s dad is a funeral director, and he allowed us to start playing music in the basement of the funeral home,” Rutledge said. “We started jamming in the basement, and that is where we started writing songs.”

The band doesn’t really have a process for writing songs; they have a more trial and error approach to creating music. 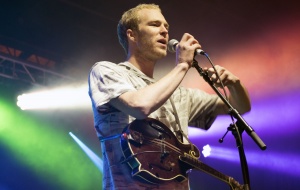 “It is more of a trial and error process where we plug away at a couple of different tunes,” Murphy said. “Sometimes we get a new song out of it, and other times it becomes nothing, we pick the jams we like and record them.”

For White Buffalo Woman, Federal Frenzy is like a reunion with other musicians from the area.

“I think it’s cool being in an environment where there is a bunch of other bands, and you can just hang out and enjoy the music, “ Rutledge said. “We know some of the other musicians and its cool to see what they have been up to and what venues they have been playing and just to catch up.”

The band’s music is a blend of all the members’ tastes. They like to incorporate different sounds, and don’t necessarily identify as one specific genre.

“We write songs that focus on events in our lives that are currently happening,” Leggett said. “We all influence each other and we like to relate to older artists and songs that we grew up listening to.”

Along with Judah & The Lion and White Buffalo Woman, there were performances by: