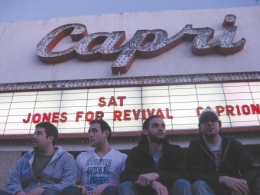 Youngstown band Jones for Revival has been practicing for the fifth annual Jonesfest. The band has expanded the usual one-day event into an entire weekend including physical activities and a hand-drum workshop. Jonesfest starts Friday and ends on Sunday. Jambar file photo.

Youngstown band Jones For Revival is hosting its fifth annual Jonesfest at Nelson Ledges Quarry Park. This year, the band decided to expand the usual one-day event into a weekendlong experience.

“This is our biggest deal of the year,” said Jim DeCapua, the band’s guitarist and lead vocalist.

Jones For Revival is made up of DeCapua, Jay Stephens on keyboard, Youngstown State University student Gino West on drums and Dave Lynn on bass and backup vocals.

On Friday, the band will pay homage to the Grateful Dead by playing cover songs from 8 to 11p.m., as well as kayaking earlier in the day. Saturday activities begin with yoga at 11 a.m. with instructor Samantha Grbinick, followed by a 5K run at noon and a hand-drum clinic at 1 p.m., which will be taught by West. The music will begin at 1:30 p.m.

West, a food and nutrition major, said band members chose The Grateful Dead because a lot of their fans are “Deadheads” as well.

“We thought, ‘Why not learn a few Grateful Dead songs and put the Jones twist on them?’” West said. “We could do two nights of Jones, but we wanted to put an added kick and give the audience something different to listen to. But they’re still getting Jones both nights.”

DeCapua said they wanted to expand the festival by incorporating physical activities as a way to stand out from other festivals, as well as to promote physical well-being.

“I’ll admit I’ve never done yoga before, but it’s something I’m interested in, and, hey, maybe after, someone else will be inspired to try something new as well,” DeCapua said.

West wanted to incorporate the hand-drum clinic as a way to bring everyone together.

“People have shown interest, so we’re doing the hand-drum clinic just to show people how to execute playing in a circle,” West said. “The idea is they leave feeling good in mind and spirit.”

On Saturday, the opening bands begin at 1:30 p.m. and include Cosmic Circle, Dr. Fresh Butter, The Bees Trees and Moser Woods.

DeCapua said he is excited for Jonesfest every year because the band gets to play a longer set.

“We all love to play and are excited to play for six hours this weekend,” DeCapua said.

West said keeping the energy and stamina alive during a long performance is exhilarating, and feeling the audience’s energy makes the time fly.

“We play and feed off of each other’s energy, and that allows us a lot of room to take chances and keep it fresh,” West said.

The band’s biography on their website states the “power of music can help change lives,” a motto DeCapua fully embraces.

“From my seat, it’s inspiring to look out into the audience and see people enjoying themselves and forgetting about the things that stress them out,” DeCapua said. “I’m thinking, ‘What can I do to make sure they have as good a time as they can?’”

He said their fans are as much a part of Jones For Revival as he and his bandmates are.

“When someone comes to our show, I just want them to feel the way I did when I picked up a guitar for the first time,” DeCapua said.

The festivities end on Sunday following another 11 a.m. yoga session.

The band hopes to have more festivals each year, and members are already brainstorming ideas for next year’s Jonesfest.

The cost for Jonesfest is $30 for a three-day pass or $20 for a Saturday and Sunday pass.