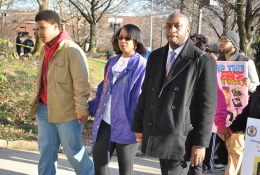 Shirlene Hill walks through campus hand in hand with her son Sidney Michael Hill Jr. and Daryl Cameron, district keeper of finance for the fourth district of Omega Psi Phi, in remembrance of her first-born son, Jamail Johnson, who lost his life in an off-campus shooting last year. The walk started near the Williamson College of Business Administration and ended in DeBartolo Hall where Shirlene Hill spoke to honor her son. Photo by Marissa McIntyre/The Jambar.

Sidney Michael Hill Jr. didn’t feel normal when he woke up Monday morning. A tranquil blue sky in early February would typically bring a smile to one’s face, yet the baby-faced 16-year-old appeared troubled. Exactly one year ago, his older brother’s life was cut short by gunfire.

“It just doesn’t even feel like a regular day,” he said.

Jamail Johnson, Sidney Michael Hill Jr.’s older brother, was 25 years old when shooters opened fire on his fraternity’s house on Indiana Avenue. He was the second to fall prey to gun violence in a year that claimed 23 Youngstown lives.

Sidney Michael Hill Jr. said he hopes that others in the area, especially the younger generations, will realize, as a result of his brother’s passing, that it’s better to solve disputes through a diplomatic approach.

“Violence is never the answer,” he said.

Shirlene Hill, Johnson’s mother, has carried on as her son’s voice, that of a peacemaker. To commemorate his life, the lives of the 11 individuals injured in the incident and the 22 other lives lost in 2011, she organized a “Stop the Violence” walk.

Approximately 100 family members, friends and members of the Youngstown State University community gathered at the corner of Hazel Street and Rayen Avenue near the Williamson College of Business Administration at 3 p.m. on Monday before marching to campus.

The walk was silent, despite an occasional sniffle and a brief respite for prayer at the Jamail Johnson remembrance tree.

The crowd filed up campus, snaking through the inner core along Kilcawley Center before culminating in the auditorium in DeBartolo Hall, where a brief tribute was held.

Participants read the names of the 11 wounded in the Feb. 6 shooting and those who have fallen in the past year.

“Burying them one at a time is not making an impact, but to see all … at one time [will] make an impact,” Shirlene Hill said. “They need to see what it’s doing to us as a community.”

Former brothers of Omega Psi Phi, the fraternity of which Johnson was a member, presented Shirlene Hill with a proclamation on behalf of Doug Franklin, mayor of Warren, declaring Feb. 6 Jamail Earl Johnson Day.

Others took the opportunity to stand behind the lectern to speak.

“We need this violence to stop in the city of Youngstown,” said William Blake, director of the YSU Office of Student Diversity. “Write to the mayor, your councilmen.”

Blake called for the city to hold “amnesty days,” where area residents who illegally possess firearms can turn them in to police without being punished or arrested.

“We’ve got to come together. This has to stop,” Shirlene Hill said. “This year has been the most devastating year of my life.”

She thanked those in attendance for their support and prayers, saying they helped her get by.

The inspiration for the walk came in a vision. Thanksgiving night, Hill said she awoke with a message from God. After losing her son, she struggled to find things in her life she was thankful for. Yet she felt compelled to endure, finding joy in the 25 years she shared with him before he passed.

“At 25, he was still listening to me,” Shirlene Hill said.

Johnson was active in the community, volunteering at Wilson Middle School as a tutor and mentor.

“Jamail stood for what is right,” Hill said. “From the day he came into this world, to the day he left, it was nothing but goodness.”

She said Johnson brought joy to the entire family.

“My word for him is ‘awesome,'” said Deborah Whitlow, Johnson’s great aunt. She recalled an incident when Johnson was 3 years old. He comforted her as she mourned the loss of her older sister.

“I remember his little hands tapping me on the shoulder telling me, ‘Aunt Debbie, it’s going to be all right.’ He was always hugging, always had something nice to say,” Whitlow said.

Sidney Hill, Johnson’s stepfather, said Johnson would serve as mediator when his parents had disagreements, furthering his image as peacemaker.

“He was loving and genuinely nice,” Sidney Hill said. “There’s no words that can explain. He gets a lot of publicity, but it’s just him, because he’s a genuinely nice person.”

“It’s just one of those things you wish you can turn back the hands of time and change things. It hurts, and it hurts a lot,” he said.

Throughout the past year, Shirlene Hill hasn’t succumbed to the pressures of grief.

“Little does she know she makes me strong,” Sidney Hill said. “I don’t see how she does it. I really don’t.”

“She’s a very strong person,” Whitlow said. “I never in a million years would have thought our family would have gone through this and never with Jamail. His life was just geared for good things.”

Whitlow said Johnson could look back on his short life and be more proud of his accomplishments than she can with hers.